I know there are at least a few of you reading this who could swap your name for mine and the statement would be completely true! 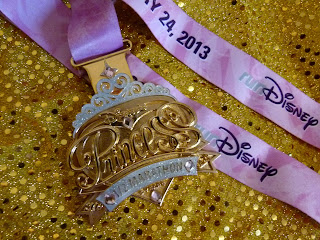 I've signed up for the Coast-to-Coast challenge -- one half (or full) marathon  at both Disney World and Disneyland within the same calendar year. The prize is an extra medal. I'm halfway to that goal. On top of that, I registered for the Dumbo Double Dare -- a 10K on Saturday, followed by a half-marathon on Sunday (think of it as a mini-Goofy). After last weekend's race, i see a LOT more training for me this summer. I can do it, but also want some energy reserved for walking around Disneyland with my medal collection. 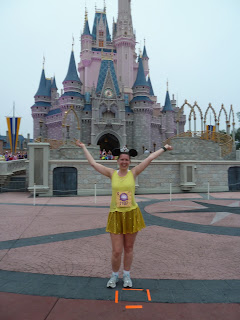 Following the Goofy in January, a friend made the comment "why can't I race in the weather in which I trained?" I thought that thought many times as I trained on snow and ice thinking "yeah! I won't have that in Florida!" Instead, I had a 66 degree start with 94% humidity and the promise of 80s by the finish. Yikes! Not at all like February in New Jersey! Fortunately the sun stayed hidden behind the clouds for the most part.

This princess melted her way through the course, finishing nearly 30 minutes after goal.

On the plus, I did take lots of pictures and chatted with princes and princesses along the route.

The course starts and ends in Epcot, with a run to, from and through the Magic Kingdom, ending with a quick lap through the future part of Epcot. This race is geared for women -- 26,000 princesses ran, with another 1,000 princes also racing. There are 325 "Perfect Princesses," and 10 "Perfect Princes," meaning they have finished all 5 races in the past 5 years. 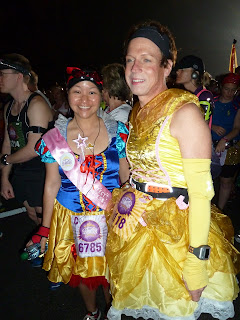 The girl power is amazing and inspiring. The men in drag (such as Ernie as Belle) add to the experience. Easily half of those participating wore a costume of some sort. Many were very elaborate. People cited Pinterest for giving them ideas. I had fun wearing the princess mouse ears from Masumi and my new sparkle skirt (made in Tampa, FL, according to Ernie). The skirt will get a lot of wear in future races. As it fits over my own shorts, it is super comfortable, while adding a bit of a flair and some fun to the day.

It is a Disney race. There were lots of photo ops with characters. I followed the rule of thumb of only stopping if there were less than 10 people in line, or if I was very interested in the picture. Some of the lines seemed to be 30 minutes for just one picture (such as of Princess Minnie, or posing with four hunky princes). I just wanted to finish before I completely melted!

Another plus was that water, Gatorade, volunteers and medical staff were plentiful. 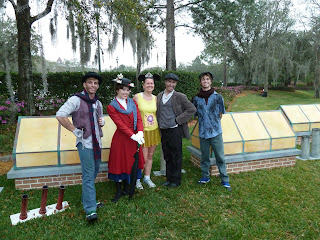 A couple of downsides, but this is being petty. The spectators were only allowed in a couple of spots, which made those spots super crowded. I was looking forward to running down Main Street. Don, Ashley, and my parents were going to cheer me on at that spot. I spent the entire stretch of Main Street craning my head looking for my family and no soaking up the experience. Fortunately the spectators were only on the left, so I didn't have to keep turning. However, I did not see my parents, Don or Ashley along the route. Ashley saw me and pointed me out to my parents. Don was in another spot and completely missed me. I foresee matching florescent shirts in their future so I can spot them in a crowd!

My energy waned by not seeing my family. The path then went through Tomorrowland, and to the Tea Cups. I passed Buzz Lightyear, but made sure to stop for Alice and the Mad Hatter. Then we continued through Fantasyland (and their walls) to Liberty Square and Frontierland. I was really ready for some water by this point, but there were no water stations set up. It wasn't until after the race that I realized they have water fountains in Disney. D'oh! The next race will be in Disneyland, a park I know much better.

I was also disappointed by the lack of music piped throughout the race. It tool place entirely on Disney property. They had lots of photo ops, but I would have enjoyed hearing more music along the route to push me along. There was some, but not enough on those long stretches along the highway. 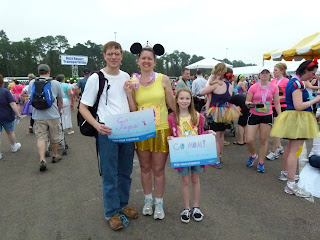 Fortunately the updating system worked and even though they missed me at the finish line, Don and my parents knew it was time to look for me at the family meet up.

After a shower and lunch, we went into Disney for Dapper Day.

For more pictures of the event head on over to Shutterfly.

For another take on the weekend, read Mr. Daps' Blog. Though you can't tell in his picture, the winner was wearing a sparkle skirt, too.

Things I wish I had done differently:

Things I did right:


As I was nearing the finish, I started reminiscing about the Disneyland Half Marathon. I realized I liked that race better because it left Disney property. It seemed more of the town got into it. There were more spectators all over the place who read my name on my bib and cheered me on by name. It sounds silly, but hearing someone shout "Go! Jacquelyn!" gave me an extra push of energy. My bib for the Princess Half Marathon said Princess Jacquelyn. While cute, it made the font too small to read, thus no one shouted to me by name (except one little girl shouting "MOM!"). I'll be in Anaheim at the end of summer and will see how I reminisce about the Princess during that race.

While it was fun, I'm not planning to run the Princess again. My heart belongs to Disneyland. This is my year to earn my Coast to Coast medal. I plan to enjoy each step along the way.
Posted by Jacquelyn at 1:06 PM