I was pleasantly surprised, and quite frankly stunned, when I charged up my Nike+ Sportswatch following a run to find out it was run #600.

I started tracking my runs in February 2012 -- at least a year after I started running. I will honestly tell all of you who hate running I only started enjoying these runs around my 500th, and only starting loving them about 50 or so ago.

I will admit some of these "runs" are bike rides, and others were walks. There are also times I run without a watch because I left it at home or it wasn't charged or it couldn't find a signal.


Posted by Jacquelyn at 6:07 PM No comments:

After years of hearing Ashley may or may not need braces we were thrust into the world of hardware last fall. It started with her worst nightmare: an expander. She was a trooper.

Last Wednesday we returned to have the expander removed, and (hopefully) have molds made for Invisilign. Unfortunately she was not a candidate for invisilign because it would have involved being without any hardware for 6 weeks, during which time her teeth would slip.

The obligatory before and after shots: 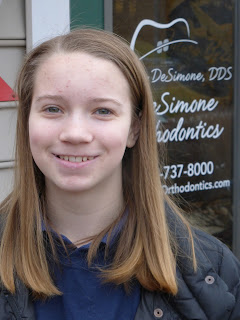 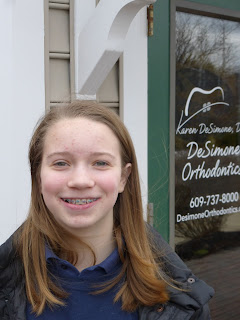 She aged in the 2+ hours she was in the office. The plan is she will wear the braces for two years, leaving her with beautiful teeth in the end. By the next morning, the two front teeth (which had been crossing each other) straightened out, thus giving us hope the back teeth (which are in sideways thanks to the cross-bite) will also fall into place.

Most of us know the drill: no sticky or hard foods for the next two years. I missed corn on the cob most when I had my braces. Wonder what Ashley will miss the most in the end.
Posted by Jacquelyn at 5:01 PM No comments:

We Can All Do Something Nice

I try to start each day reading an email sent to me by The Upper Room. Some days I am better able to focus my first few minutes than I am on other days. For Lent I added reading a devotional emailed to me every morning at 5 AM from Nassau Presbyterian Church. Between the two devotionals there is often something worthwhile that sticks with me throughout the day, or even longer.

On Ash Wednesday (this year on February 10) both places cited the same scripture: Isaiah 58:1-12 (the fasting scripture).

Isn't this the fast I choose; releasing wicked restraints, untying the ropes of a yoke, setting free the mistreated, and breaking every yoke? Isaiah 58:6

I'll be honest. I have never been able to get behind the concept of fasting as was presented to me by my Catholic friends when I was growing up. They would give up chocolate or candy or something bad in the name of being a good Catholic. I felt quite righteous in my Protestant beliefs that we don't do that, just as we don't offer animal sacrifices or refrain from eating meat on Fridays. To me giving up something sweet sounded to me as if they were putting themselves on a diet. How did that help God?

As an adult I heard more explanations that made sense. Fasting can also mean taking on a spiritual discipline. The idea of a fast is to become closer to God, not to go on a diet.

The person at Nassau Church who wrote the devotion took in a step further. He said to look for ways to "identify some need we can address in a helpful way and then take action?"

This is the thought that lingered with me:


what need do I see and what can I do about it?

I pondered this while taking a walk in the woods near my house. The thought that came to me was a fairly simple one: ask my neighbor if I could watch his house while he went to his son's funeral. He may have already had someone lined up, or he may not have seen the need. Instead I caught him when he was outside moving cars around the driveway (he does that a lot) and he said he was going to ask me if I could watch the house for them. It turns out someone ransacked his in-laws' house while they were at his father-in-law's funeral (something we had thought was urban legend, but has a foundation in reality).

I sat in their living room with a book and their dog for about four hours. Trust me, it was not hard.

The experience is encouraging me to look for other ways in which I can be a help to someone. What are ways you can do something nice for someone?
Posted by Jacquelyn at 4:54 PM No comments:

A couple of years ago I heard about a group called Alliance Francaise. I've been receiving emails from them for a while. They have fun activities like an annual Bastille Day fete, monthly conversations, our gallery visits (en francais), plus an annual Christmas party (ironically held down the street from my house, but I still talked myself out of going).

In December the group had an article about themselves in the Princeton Packet. It may have even been in the last edition we received. Reading the article I knew I wanted to join them. I had been picturing this enormous group of people who speak French like natives and would act all snobbish around me. I wouldn't know anyone. I don't remember nearly enough French to hold a conversation. They meet at Happy Hour in a local bar. It is easy to talk yourself out of something, especially when it involves leaving the comfort zone.

This Thursday, even though the timing was not the best for my schedule, I did it. I drove into Princeton. I found the group easily. I found an empty chair. I started talking to complete strangers in French. Whew. Linda is a loquacious woman in her 60s who reads Voltaire for fun. She brought her friend, Fran, who she met through volunteering at a local historic home. Fran has had French lessons, but is very timid about speaking the language. They both immediately put me at ease.

I overheard others speaking naturally as old friends. I suppose after months of chatting with each other over wine and beer, they are old friends. It was a challenge hearing the words and turning them into conversations in the local bar. There were times I wanted to sit back and absorb it all, but alas someone would draw me into a conversation. After all, the focus of the group was on conversations not on being flies on the wall.

What did I learn? People were friendly. The language came back to me. It was mentally tiring speaking and listening in a new language. I woke up the next morning with a sore throat because it uses different muscles to speak in French than it does in English (the "u" is a sound very hard for Americans to make, the "r"s are harder, too).

I learned a few new words such as patinage and logiciel. I never went ice skating while living in Belgium or had a need for software in the 1980s. I realized I need refreshers in numbers when someone said 45 (quarante-cinq) and I was thinking 85 (quatre-vingt cinq). To make matters worse, this gentleman about my age was talking about how old he is. Ooops.

Numbers will always be an issue for me because some are different in Belgian French than in France French. For instance 95 in France is quatre-vingt-cinquante (or 4x5+15), but in Belgium it is nonante-cinq (ninety-five). The seventies are the same way. In France 72 is soixante-douze (60+12), but in Belgium it is septante-deux (seventy-two). I've heard in Switzerland they simplify 80 to octante instead of quatre-vingt (4x5).

I hope you enjoyed this mini French lesson.

In addition to meeting monthly on Thursday evenings, they also meet twice a month at McCaffrey's midday on Mondays for two hours. During one hour they all speak French, during the other they all speak English to help the native Francophones learns our language. This way everyone has the opportunity to be both the teacher and the student.

I'm hoping this helps me to revive a part of me that has been dormant for too long.

I don't tend to remember my dreams, but there was this morning about three weeks ago I woke up and not only remembered parts of dreams I wanted to record them. I typed them here, but didn't plan on sharing them until I had a chance to sit with them.

The first was I attended a reunion for my co-ed college fraternity in Florida. Mind you, we were a local fraternity based on the campus of Trenton State College, therefore it would only make sense to host such a reunion in New Jersey. The other odd thing was our fraternity only lasted about 10 years (I was a founder, my sister (Melissa) was in one of the last classes). This was our 30th reunion (we were formed in 1990, so the math was a fail) and I did not recognize most of the names and faces. We met in a conference hall with assigned stadium seats. There were pictures of each of us at our official seats. Way too organized for Kappa.

Fast forward a couple of weeks. Kappa Wendy was on vacation on the other side of the globe and met a man wearing a jacket that said Kappa on it, it was even in our official colors (red and black). She jokingly posted he was from our Korean Chapter.


The other dream was even stranger. I ran Ran a 10 mile race with an 8:52 pace, which worked out to 89 minutes. The math even worked out (unlike in the Kappa dream). Sandy Claws Dragon was in my hip sack throughout the race. The race was held on Father's Day. In lieu of medals, we were each handed a phone so we could call dad to either wish him a Happy Fathers Day, or tell him how we did in the race, but not both. Given how awesome my time was, I wanted to tell him both. It was actually a dilemma for me since I am an 11:05 miler, and to cut over a minute off of my time would have been extremely noteworthy.

I mentioned this dream to a friend. She suggested I am struggling with trying to make a decision in my life. Choosing one means I can't also choose the other. I've been mulling over what fork is in the road for me right now.


Now I want to keep a notebook by the side of my bed and try to jot down notes from more dreams before I forget them. Maybe one day I will have a dream that helps me figure out this crossroad and what to do about it.
Posted by Jacquelyn at 3:33 PM No comments: