"World Beneath My Feet" 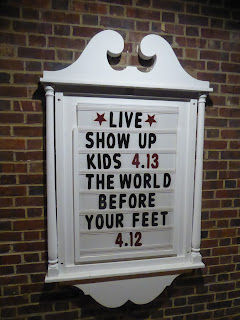 On Friday night Don and I saw the movie "World Beneath My Feet" about Matt, a man who spent six years walking every street in New York City. After 8,000 miles he called it quits to work on the movie (follow the above link), but in the past three years he has walked at least another 1,000 miles and still has more to go. In addition to the streets, Matt walked every pier, park, cemetery, bridge, abandoned property, etc. After two and a half years of walking, his friend Jeremy tagged along to document part of his journey over a three and a half year span. They then compiled the 600 hours of footage into a 90-minute documentary. He blogged off-and-on about his experience.

To put 8,000 miles into perspective, Matt's previous journey was a cross-country walk that was 3,500 miles from Rockaway Beach, New York to Rockaway Beach, Oregon, which took four months.

Matt's New York experience included talking to a lot of people, engaging with them, photographing his surroundings, and researching what he saw. He sustained his lifestyle by cat sitting, couch surfing, and watching apartments. I see his website has a link for donations. 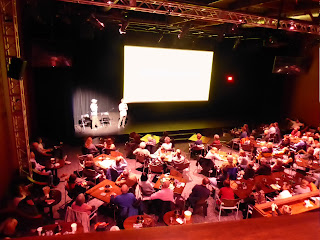 After the movie there was a Q&A with the director and the star. I wish we could have stayed later. I wondered how many shoes he went through, and other logistics. Someone did ask about bathrooms, and he admitted as a guy he had a biological advantage over a woman doing the same trip.

The movie was shown at the newly renovated Hopewell Theater as part of Princeton Public Library's annual Environmental Film Festival.
Posted by Jacquelyn at 9:52 AM No comments:

Last Sunday was a beautiful day in New Jersey. After a gloomy (though not very 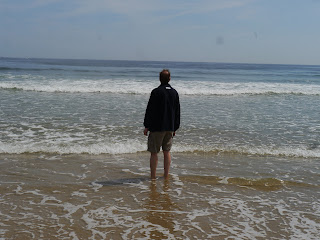 snowy) winter, spring arrived. Don and I decided to take advantage of the lovely day with a walk on the boardwalk (about an hour away).

That always prompts the question, which one? Belmar is the closest. Point Pleasant is the most touristy. Asbury Park and Ocean Grove we went to recently. Ocean City is nice, but farther away. 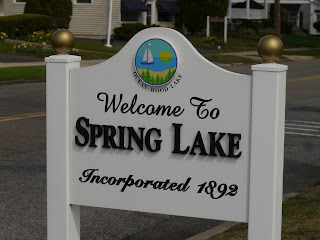 For some reason that day we chose Spring Lake, possibly because of its charming Main Street area. We had no idea we were in for a pleasant surprise. The day before Spring Lake unveiled a Seward Johnson Sculpture Exhibit (running through July 7, 2019) featuring 16 of his his "celebrating the familiar" sculptures.

We've been Seward Johnson fans for a long time. The year he took over Grounds for Sculpture with his statues (only fair because he owns the grounds), we became members.
We have seen his sculptures all over the globe, in New York City, at the Corcoran in DC with Dave and Wendy, plus random spottings that did not make the Pillsbury Press. His statues of people are iconic.

After walking the boardwalk, we looked for the four-block Main Street, which is actually called 3rd Avenue (a name that will help us find it next time). As we drove into town on Passaic Avenue we saw our first Seward Johnson sculpture (Allow Me) across from the train station, but thought the town only owned one and did not stop. We didn't realize it was part of an exhibit. Later that became the last sculpture we saw. All in all, there are 16 sculptures. You can easy see them all in an hour, even with stopping to pose with the sculptures and take pictures.

As we stopped and took pictures, we noticed others doing the same. Families were having fun interacting with them. They made people smile.

Here are the sixteen statues:

Many of these sculptures were first created in the 1980s and 1990s. They are cast bronze, and remade over the years, therefore you can see the same statue in different places on the same day. The attention to detail is like a time capsule. The Members Only jacket, the Jordache jeans, the brands of sneakers ... all evoke memories in those of us old enough to have seen the originals in our daily lives.

The exhibit is free and worth seeing if you are in the area before July 7th.
Posted by Jacquelyn at 11:29 AM No comments:

For the fourth year in a row I did the Tomato Soup 4-miler in Washington Crossing, PA.

This is one of those races what you see is what you get. It is a 4-mile race along the canal and back again. I like it because I tend to bump into friends, plus is in early March, which helps motivate me to get out and run in February when it is bleak out. The distance is longer than 5K, but not really far.

The day before the race they said they had some cancellations, so Don was able to sign up for a last minute bib. He went into the race having not run since Run the Bridge in November.

We did not run together. 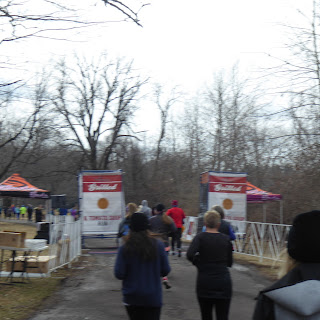 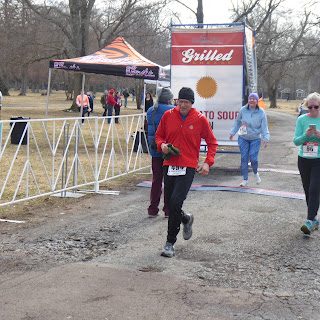 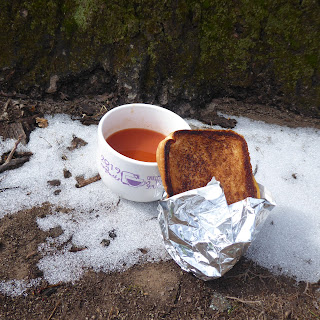 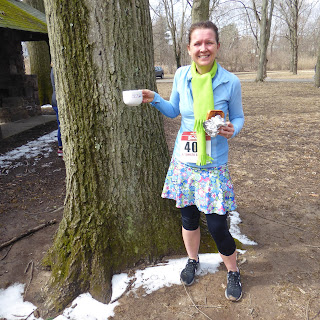 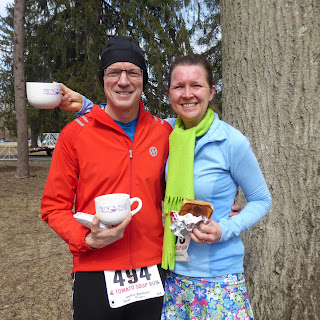 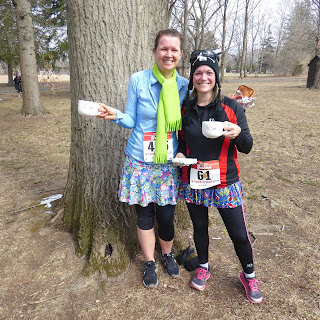 Gabrielle and I are probably the only two people wearing skirts, though I think I did see a man wearing a kilt.

We already signed up for 2020. Next year they are planning to make the grilled cheese sandwiches on site, which should make them melt in our mouths at the end of the race.

Posted by Jacquelyn at 5:00 PM No comments:

We debated between holding the event upstairs vs. downstairs. The pro to upstairs was the attendees would not have to go down the rickety basement steps, unless they wanted to use the rest room. The con was there was no area large enough for people to gather and be far enough away from the screen to see the power point presentation. If only a half dozen people came, we could gather around the three copies of the books.

The only downside to downstairs were the stairs.

In the end, about 20 people came. Some left early, others came late. My friend 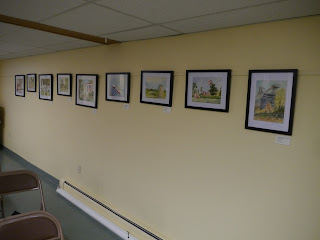 Nancy surprised me by coming, so I put her to work pushing the next "button" on the PowerPoint presentation. 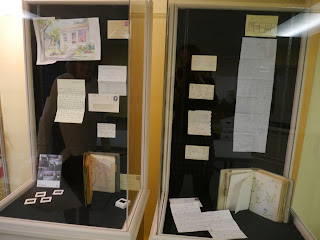 I am wishing I wrote this post sooner, but running my first gala took all my free energy over the past month.

Ellie, the director of the Ewing Historical Society, and the rest of the historical society outdid themselves. They had a lovely spread of cheeses and vegetables for the post-presentation noshing. Ellie recently took some of Honey Bunny's ephemera and put them in two cases. It was the first time I saw this. She included a sketch, a sketchbook, some slides, a letter she wrote. It was very moving. Of course her artwork was also on the walls.

A great surprise to me was seeing Grace. Grade was Don's 5th grade teacher in 1974 (as a guess). She still remembers his class as it was her first year teaching. Don confirmed her stories. I met her in 1988 when I was at TSC and she was on the alumni board. She has not aged. She commented it is nice to stand next to someone as tall as she is. It was also wonderful seeing Wayne and Sylvia, Wayne was one of my first college professors. I was touched they came, even though they heard the same basic presentation last year at the Ewing Presbyterian Church's senior group.

I wish I had more to add. It was a lovely gathering. Public speaking is not something I do very often, though I am not afraid of it, hence it is a good skill for me to continue to hone. I thank Ellie for giving me the chance to leave my comfort zone for a short while. 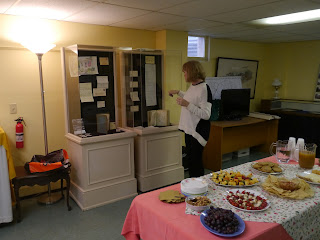 Posted by Jacquelyn at 4:37 PM No comments: