I finished a Half Marathon with a smile on my face! 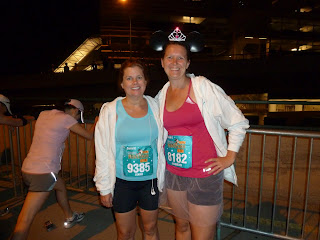 Joanie Morris and I at the start of the run. Believe it or not, she is still speaking to me! We gathered at 4:30 AM for a 6AM start time. Our corral didn't get to start until almost 6:30. Yes, I was tired before we even started. 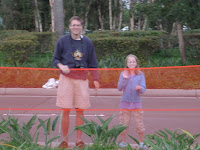 Somehow we noticed Don and Ashley at the start of the race. We also saw them about mile 2.5 when we were leaving California Adventure and heading over to Disneyland. 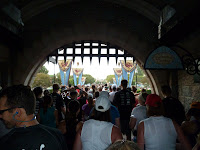 Running through the castle. The parts of the race that took place through California Adventure and Disneyland were definitely a lot more fun than running through the streets of Anaheim. They were also the slowest parts because we were all having a lot of fun sightseeing and taking pictures. I took about 200 pictures during the run. 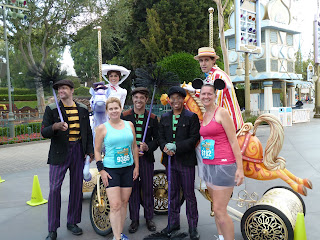 Stopping to pose for characters also slowed me down a bit. At least we finished before the giant broom swept us away. Joanie was a great sport with indulging my photography interests. 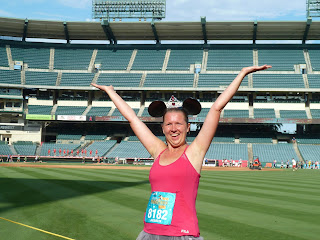 Another really cool highlight was running through Anaheim Angels stadium. We were on the warning track between the dugout and the field. For a baseball fan like me it was AMAZING! Though we walked most of this mile (sighseeing, narrow passageways) it also felt like the fastest mile because it was so much fun! 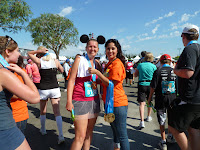 Getting my medal! It was well earned!

Ashley is my biggest cheerleader. She made this sign while I was sleeping the night before the race. Love the mouse ears on Mom. 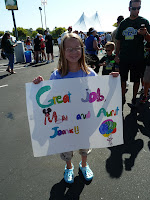 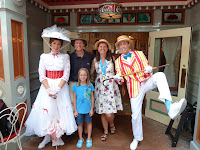 Since I saw Mary Poppins and Bert during the race, it was only fitting that I took a post race picture with them, too.

Between "running" 13.1 miles, and walking around Disneyland for 5 hours, I logged 48,430 steps on my pedometer that day. A new record.

My time was about 3:24 -- yes, about a 16-minute mile, and only 6 minutes faster than their allowed time, but I had fun and that's what really matters.
Posted by Jacquelyn at 9:29 AM No comments:

You, my few faithful readers, know me. You know I like to plan my life in advance. I don't adapt well to surprises and last minute changes in plans. In other words, I am a Virgo.

As is typical with one of our trips, I booked the airline tickets months in advance. We were all set -- leave Sunday morning on the first flight out of JFK. Land in Long Beach, California at 1 PM. Pick up luggage. Pick up car rental. Check into HoJo's Anaheim. Walk to the Main Gate. Arrive in time for Musical Chairs at 2:30. It is a system and it works for us.

Since this trip will become a distant memory soon, I want to take a few moments to record a few thoughts. These are more reminders for me, than a story for my blog readers, so be warned, this does ramble.

That Tuesday the East Coast was shaken by a 5.9 earthquake -- the first earthquake I ever remember feeling. While not causing any damage, it did rock things a bit. (pun intended) That week Ashley had Lenape Camp each morning. Afternoons were a bit busy, too, as it was our last week of being home before our trip, before the half marathon, and before school started. I also had a lot of extra articles to write for the Lawrenceville Patch, and a job interview to become a Youth Services Librarian (sadly, I learned on vacation I did not get the job) in a local library.

Then we learned about Hurricane Irene. Being an organized person, I called Jet Blue on Wednesday to change our Sunday flight. They were not ready to offer free changes yet.

I called back on Thursday when they said we could make a change. Fine. We were set to leave on Saturday night at 6, rather than Sunday morning at 11. The storm was not supposed to make it to our area until Sunday at noon, we would be getting out of Dodge!

Still feeling smug, Friday night at 6 we go to the Jet Blue website to check into our flight. Uh oh! The message says to call Jet Blue as there has been a change with our flight.

This can't be good.

JFK decided to shut down their airport at noon on Saturday in anticipation of Sunday's storm. Even if we had gotten on the 1PM Saturday morning flight, we'd still be stuck. (We later learned the 1PM flight left at 11 AM, presumably fairly empty, but that was not an option.)

Another call to Jet Blue. This one lasting nearly an hour. We talked about leaving on Wednesday instead of Sunday. That meant missing out on seeing Masumi (a friend from Japan who was returning home on Monday morning). It also made us debate about returning later (would the hotel have availability? we prepaid for the car rental, would we have to forgo that? how did I feel about Ashley missing the first couple of days of school? could Don change his vacation time?).

Suddenly Leah (a Jet Blue manager called in to cover the flood of phone calls) said the magic phrase: "what do you think about flying out of Dulles?"

All of the sudden a light bulb went off and we jumped on the chance to fly out of Dulles (confirming she meant the airport in Virginia and not the one in Texas that sounded very similar). We made the necessary changes to both ends of the flight (must pick up car at the end, you know) and hung up grinning.

Then reality set in.

Wasn't the hurricane coming from the South? How were we supposed to get from New Jersey to Washington, DC while a pre-hurricane was coming from the opposite direction? Wouldn't Dulles be closed because of the same storm?

We went to a play on Friday night. Ashley slept over my parents' house. We bought a few supplies (we thought we were leaving the next day on vacation and the cupboards were bare) and made plans.

How are we going to get there?

We looked at a map and decided to drive an hour out of our way, in-land, to avoid the path of the hurricane.

What time should we leave for an 11 AM flight?

How about 3 AM? Well, that's right when the hurricane is supposed to be hitting our area. How about now? Sounds good to me! About 8PM, an hour after deciding to leave, we hopped in the car and drove to Sterling, VA. We had the roads to ourselves. Yes, it was raining, and at times a bit windy, but much better than it would have been at 3 PM.

We spent the night at the Country Inn and Suites. We had a great breakfast in the morning. We left our car at the hotel (the hotel+parking was less than we pay to park at JFK) and hung out at Dulles. We were the only ones at the airport. We had to wait behind one person at security. 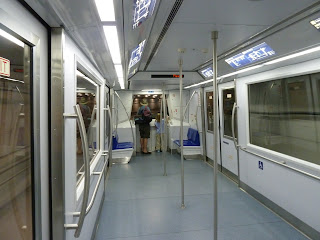 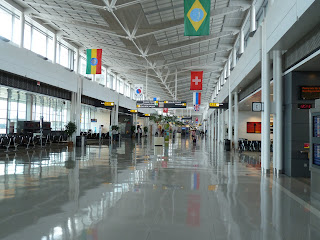 It is a wonderful airport. We had lunch at Max and Erma's and browsed the Smithsonian gift shop. As we passed the chapel, Ashley commented they had a chapel so you could get married and go right on your honeymoon.

Our flight was two hours late -- not bad all things considering. A friend from high school is a Jet Blue pilot. She was able to keep us updated on changes.

We smiled all the way to Long Beach, California.

Next time we plan to fly to California, we'll look flights out of JFK and Dulles. Still sticking with Jet Blue, though, because they are the best.
Posted by Jacquelyn at 9:09 AM No comments:

Each trip to California we try to do something new, something to make this trip stand out from past trips. I know it seems as if once we get to California, all we do is go to Disneyland.

Going to Disneyland is easy. We don't even need a rental car. Our hotel is a half mile walk from the main gate. Once we purchase our Annual Passes, there are very few expenses associated with a day at Disneyland. Plus we always enjoy catching up with friends, some of whom feel like family after all these years.

This trip was destined to be different. For the first time since 2005, we did not get an Annual Pass. Instead, we opted for a 6-day pass, but we were in California for 8 days. That meant we had two days of either staring at Disneyland from the balcony of our hotel room, or hopping in the rental car and going someplace else.

You'll be happy to know, we went someplace else AND had a terrific time. 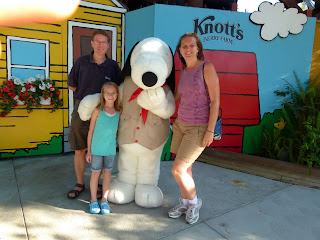 We spent the day at Knott's Berry Farm -- America's Oldest Amusement Park. At Mrs. Knott's Chicken Dinner Restaurant (where we had chicken dinners, of course), we learned Knott's was the start of many other firsts in the theme park world: 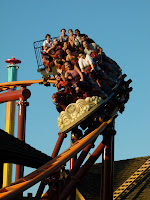 Those of you who have spent a day with us at Disney know we hardly ever ride any attractions. At Knott's we only saw three characters: Snoopy, Peppermint Patty and Schroeder. Yes, there was a point when we though we've only been here for any hour, what are we going to do with ourselves? You see, even though Don and I were once members of American Coaster Enthusiasts (ACE), Ashley does not agree with our excitement over riding coasters, even though she was tall enough to ride most of them.

I really loved riding the Pony Express. This is the first time I have been in a seat the shape of a horse. Don liked the ride, too. Ashley felt the seat was too uncomfortable. It was not designed for a 49 inch person.

Don was eyeing up rides that looked too adventuresome for me, so Ashley and I wandered around Camp Snoopy, where she enjoyed the bounce house, and saw a couple of not very exciting shows (nothing can compare with "Aladdin" at California Adventure). The park was dead -- which meant very few lines and therefore we really felt as though we saw everything and rode everything we wanted to within a couple of hours. 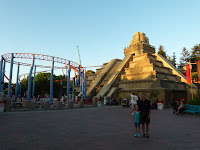 Don meets up with us and tells us he found a ride Ashley would like. It is a bit more exciting than Matterhorn and Big Thunder Mountain (both Disneyland rides she does like) but not as overwhelming as Ghost Rider -- the "longest wildest roller coaster in the west." It is called Jaguar. 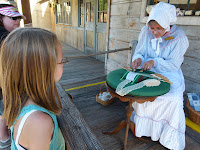 I still think her favorite part, though, was watching this woman tat. The lady swears it is easy to make lace, tedious but easy. Who knows, maybe Ashley will learn a new old craft. She sure loves her history.

Time will tell if we will return. For now, we are glad we went to Knott's Berry Farm -- finally!

Bummed I accidentally deleted a blog post about Disneyland. I know in the post I wrote about how much I enjoy catching up with friends, such as Kimberly, Marilyn, and Ragtime Robert.

I also probably wrote about how much we enjoy watching Ashley play musical chairs at 2:30 each afternoon.

Perhaps I also wrote about how our Disney experience has changed over the years.

Unfortunately as I did not make a back up for 2011 (though I have one for 2012), we'll never know the full extent of what I wrote.
Posted by Jacquelyn at 8:43 AM No comments: