Col. Hand Marches through Lawrenceville for the 58th Time

On January 2 and 3, 1777 Col. Edward Hand led a skirmish on the future property of The Bridge Academy.

On January 4, 2020, Bill Agress portraying Col. Edward Hand, led us to Route 206 to retrace his steps in reverse. 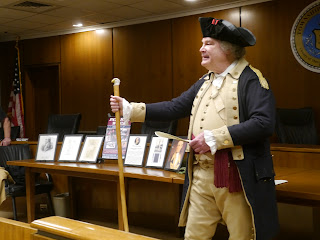 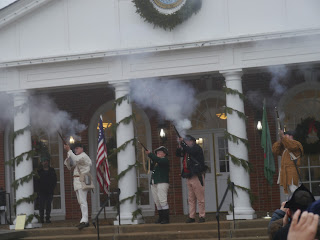 As Col. Hand died at the age of 58, and this is the 58th annual march, the march has lived longer than the man. Col. Hand was 32 when he led the skirmish. Bill quips he has been Col. Hand longer than Col. Hand  was Col. Hand (he was only a colonel for a year, he became a general). 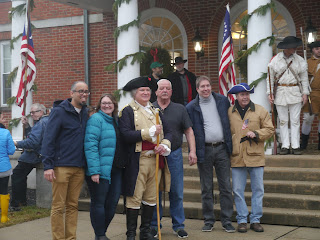 Every year Bill and the local historians try to put a fresh spin on the march. This year about 70 people turned out for the pre-march speeches, with about 50 of them doing the two-mile march. Thanks to The Bridge Academy's new plaques, this year the march crossed The King's Highway (Route 206) to study our plaques.

When I heard a stop was being made at school, I decided this was the year I would do the march. That and it wasn't raining or cold.

The march began with speeches by historians and politicians. All five council members attended, as did Fred, a relative of one of the men who served under Col. Hand.


For me the highlight was the stop at The Bridge Academy. The mist gave it a haunting feel. 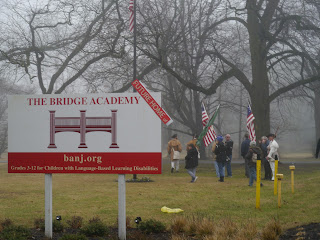 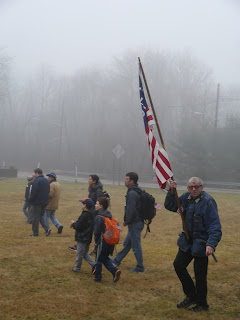 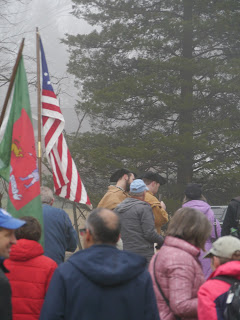 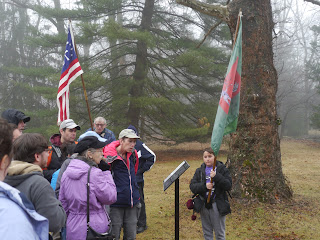 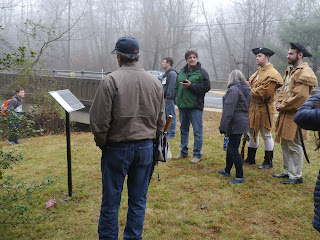 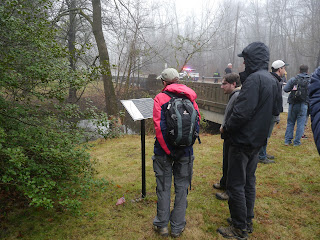 For others the highlight was probably seeing the cannons fired. I kept thinking if we kept our weapons at that level of destruction mass shootings would likely disappear. 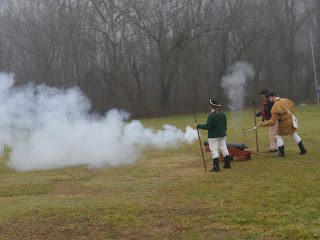 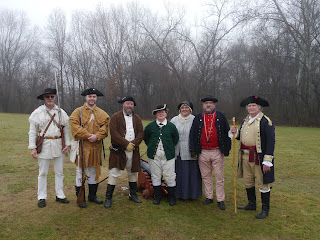 After a snack at the Lawrence Nature Center on Drexel Avenue, a shuttle bus was offered to get us back to the municipal building. I opted to walk the two miles back with Paul, one of the historians from our committee. It was an amiable chat. We made it back before the rain.
Posted by Jacquelyn at 7:17 PM 1 comment:

There is always something virtuous about starting the New Year with running. In 2016 I ran the Hamilton Hangover, a 5-mile race through Veterans Park in Hamilton, NJ. I remember running that race twice, but I'm only seeing one blogpost. I enjoyed the race, but it was discontinued.

This year I made a point of doing it. Everyone raved about the race being worth doing for the hoodies alone. This year they switched things up and we were given really nice running zip up sweatshirts instead. Probably something I'll use more often. (Don is wearing his in this picture.) 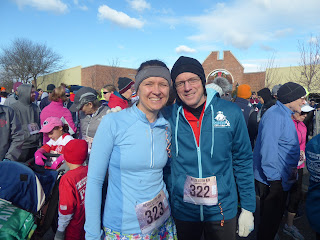 After all that, I did not bump into Sandra. I later heard running octogenarian Betty was at the race, but did not see her, either. I did bump into Pastor Jeff, who I did not recognize in running gear, and a woman whose daughter was in a play at Somerset Valley Players with Ashley. Don did the race, too, but thought he would walk it since his back was bothering him. 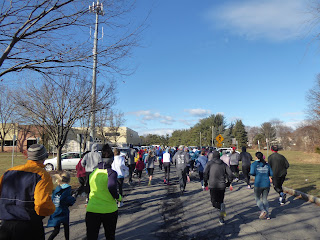 The race itself was a fabulous local race, the kind I wish they did more often in Lawrenceville. The kind where every runner and walker in town bumps into a bunch of friends. We started at the municipal building and did a loop around the building before crossing the finish line and doing a larger loop through the neighborhood. The course was flat. People came out of their homes to cheer on their friends and families. 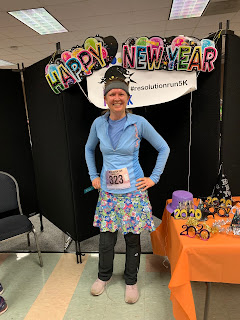 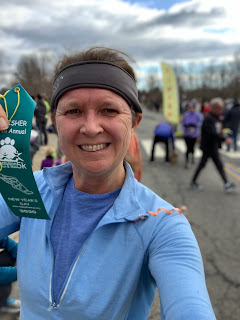 I can't complain about the race, I only wish it was in Lawrenceville and I bumped into more people I know. It was very well organized with lots of volunteers and an indoor space to hang in, and with indoor plumbing. The swag is nice -- even included a $20 off coupon to Princeton Running Company. People were very friendly. Don left saying he wanted to do it again next year. We'll see.

Nearly a week into the New Year and I'm still struggling with good resolutions/goals. I looked at last year's list, the one that stands out is my second goal:

Visit a new (to me) city. Other years I've said I wanted to go to a new (to me) country, but international travel is far from glamorous these days, so I'll amend that to any new city,with Charleston and New Orleans currently in the lead.


Wow! A year ago I had no idea life would take me to Israel to live on a kibbutz and participate in an archaeological dig. Going on a dig has been a goal since I was in my 20s, but never a realistic enough one I thought would really happen.

Most of my other goals did not happen. I still have not explored low-carb recipes, or make a friendship as solid as the one I had with Carin (though I have strengthened friendships and reconnected with people, none are at that daily, confident stage). Instead of having races in the 4-10 mile range, I've cut back down to 3.1 miles. A series of scraped knees had me fall out of the habit.

I would like to kick diabetes in the ass and be able to eat whatever I want, whenever I want, without guilt (which might lead to having to lose weight after I pack on some pounds from carefree eating). Last week I had a setback with that goal when a blood test revealed I have a gluten intolerance (which I don't feel) and must avoid gluten at all costs, especially cross-contamination and possibly lotions. This means my dreams of international travel without having to worry about what I am eating have vanished. It stinks when dreams die.

Mind you, I have been controlling diabetes with diet and exercise (and no medicine) for nearly five years, I just want to be able to eat carbohydrates again and stop feeling like I am depriving myself.

Meanwhile struggling with where Ashley will go to college next year. Her top choice is too expensive (very little aid offered) and the other school she applied to has since been deemed too close to home (even though they offered a generous merit-based scholarship). A goal is to find her a new dream school. But I can't do it without her.

A work goal would be to raise $1.2 million to renovate the house on the property and use it for classrooms. Anyone reading this who wants to donate, reach out. Naming opportunities are available. Another work goal is learning Publisher.

Probably a realistic goal is to become a notary. I am fortunate there is a notary at the school, but what if she is out? It would be helpful to have a back up notary. The county has monthly swearing ins for only $15. Like I said, realistic as well as quantifiable.

So, now what? Continue floating through life in a low-carb haze? Just see where life takes me?

What are your goals/resolutions?
PS: I really thought I set the goal of running ten 5ks a month. Does it count if I add it in December?
Posted by Jacquelyn at 6:43 PM 1 comment: