Ashley's religion homework last night was to write about a time you felt divine providence in your life. That might not have been the exact wording, but that was the gist of it.

For purposes of the assignment, Divine Providence was defined as God turning something bad that happened into something good.

We came up with the example of a classmate who broke his arm. Since he couldn't swim, he then joined the drama club and is having a lot of fun with it.

Then we talked about the classmate whose grandfather died, so her grandmother moved across the country to live with her and now they spend more time together.

I tried to come up with personal examples. It is tough to think about bad times in our lives. I thought about the time I was in tears because I did not win the class president election in college. I really wanted to lead the class at reunions (I worked in the alumni office during college). I lost. A couple of years later the school changed its name in a way that was so divisive, even though by then I was on the alumni board, I have hardly ever returned.

More recently I was in tears over not getting a job I really wanted. Still searching for divine providence in those two situations. Certainly, my life ended up going in a different direction. I took a one-month library job that would not have been possible had I accepted either one of those positions. Now I'm planning to apply for librarian positions for next fall.

Back to Ashley. The best we could come up with was the time we had a mice infestation. The exterminator took care of the mice. We adopted two cats (Charlie and Ariel), who give us a lot of amusement.

When have you seen God make lemonade out of lemons?
Posted by Jacquelyn at 8:45 AM No comments: 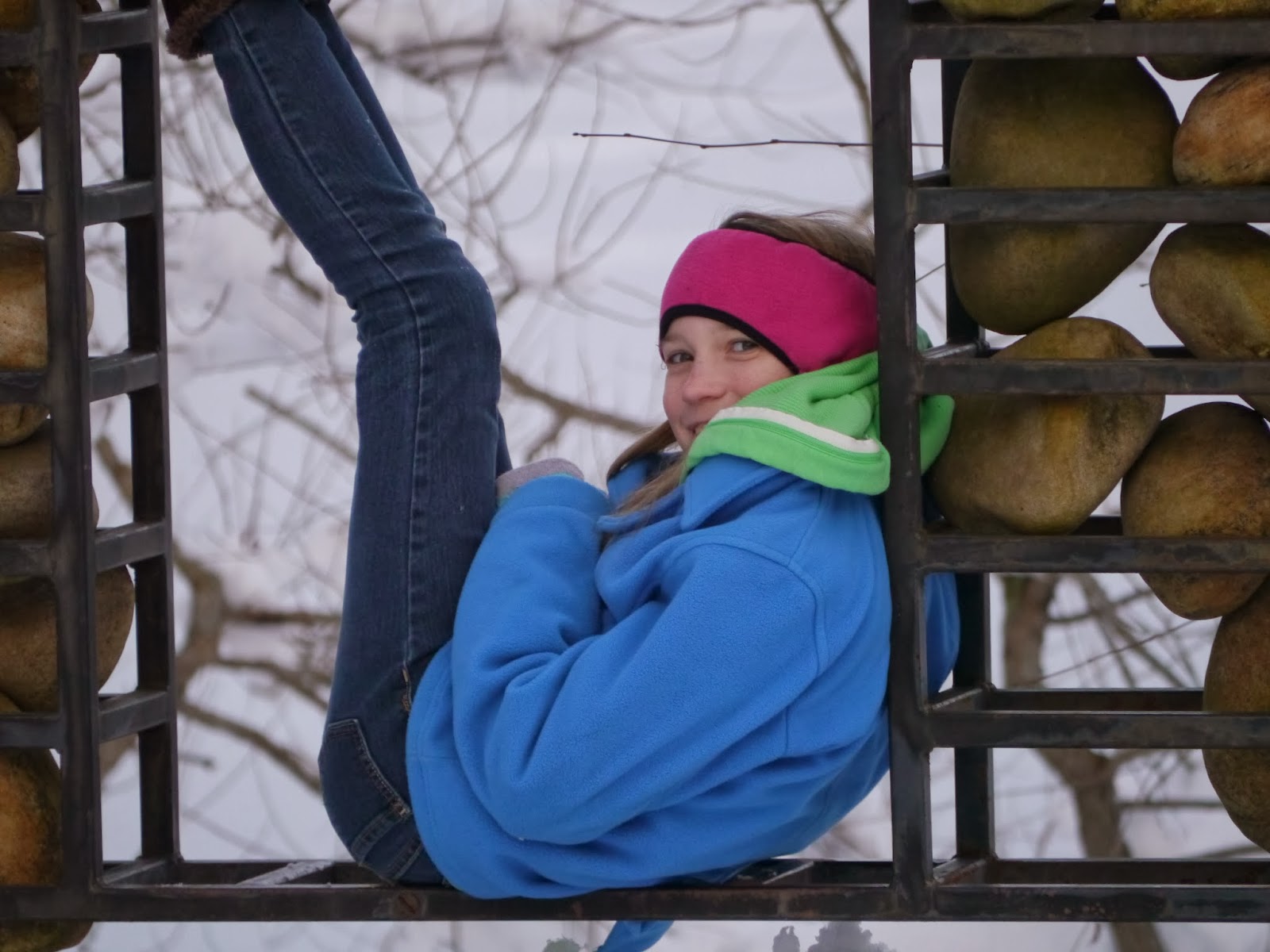 The Grounds for Sculpture in Hamilton, NJ (according them, only "minutes" away from Princeton) is beautiful all year round. Often crowded with school groups and families, it was a rare treat to have the place to ourselves.

Grounds for Sculpture is located on 42 acres, on the site of the former State Fairgrounds (former as in long before my time in Central Jersey). The feature 260 outdoor sculptures, including many by J. Seward Johnson, the founder of the sculpture garden and visionary behind it.

After many years of debate, this year we decided to become members. One of my goals was to visit the grounds at least four times -- once in each season. We joined in August, I returned in October during the peak of fall foliage, and returned in January and February to take pictures in the snow.

Wear boots if you plan on going in the winter as only some of the paths are plowed. There are also two indoor galleries and a cafe where you can go to warm up on a cold day.

Here are some of my snow pictures from Monday's storm, before the ice took over on Wednesday. Enjoy! 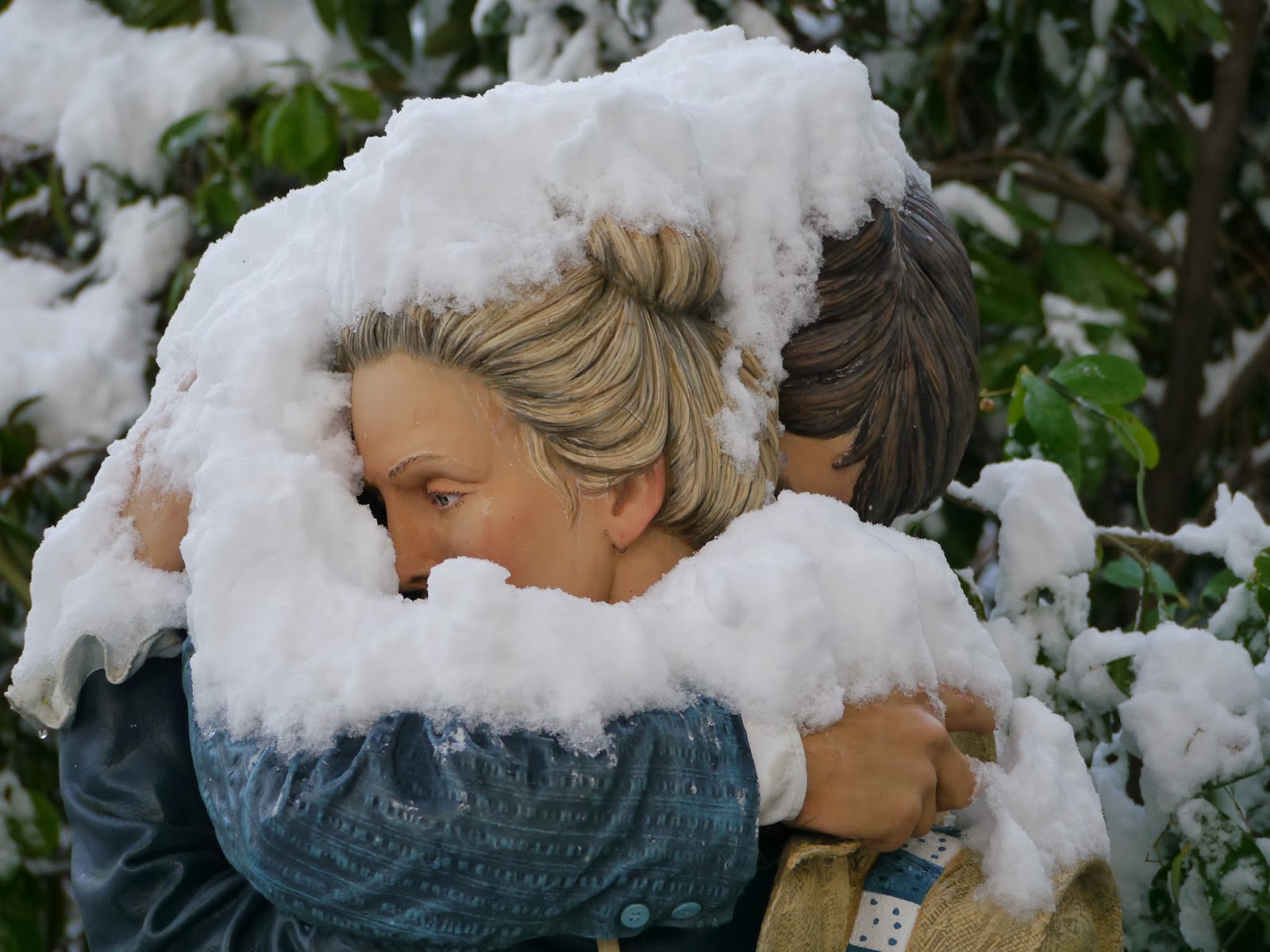 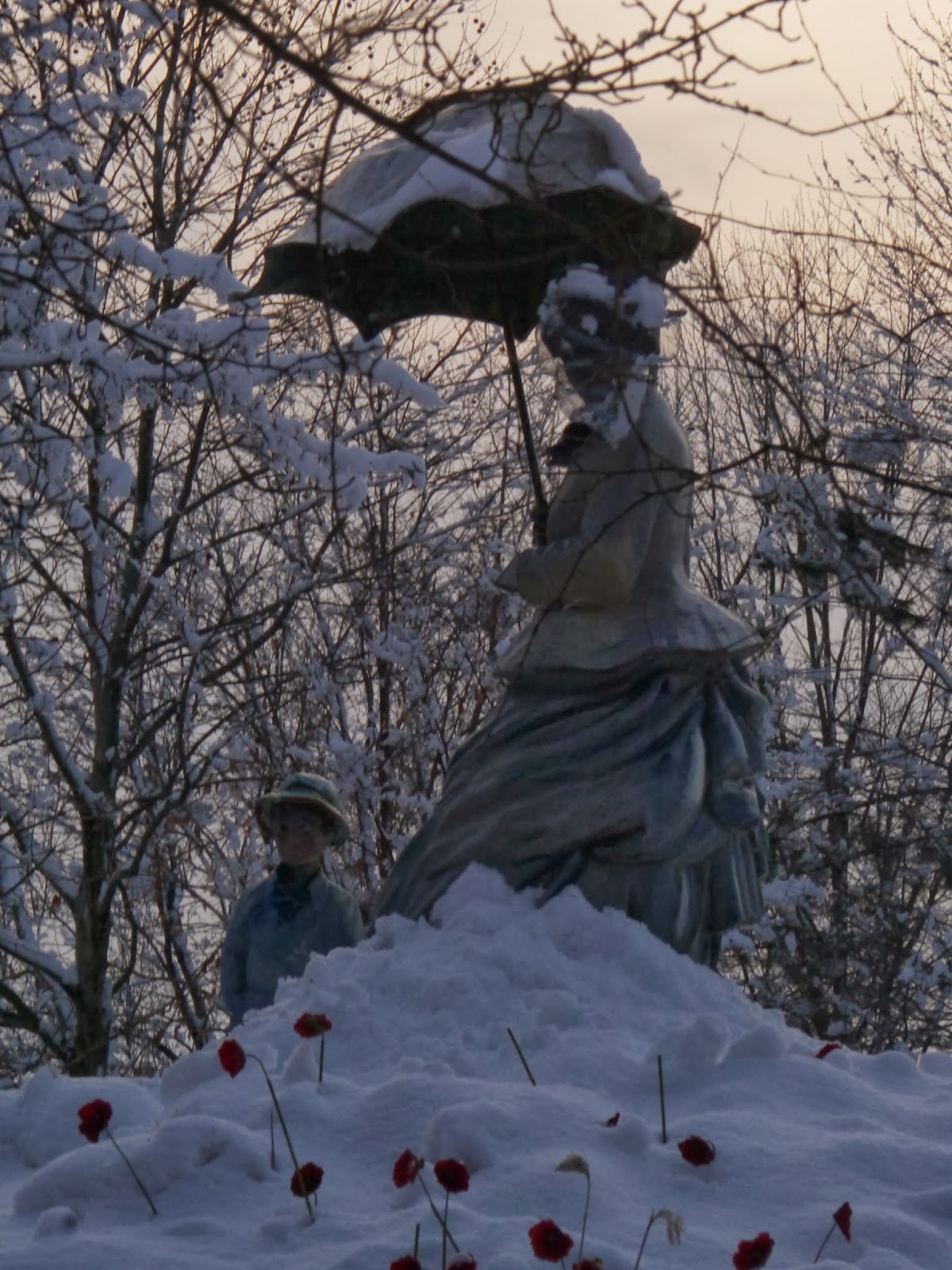 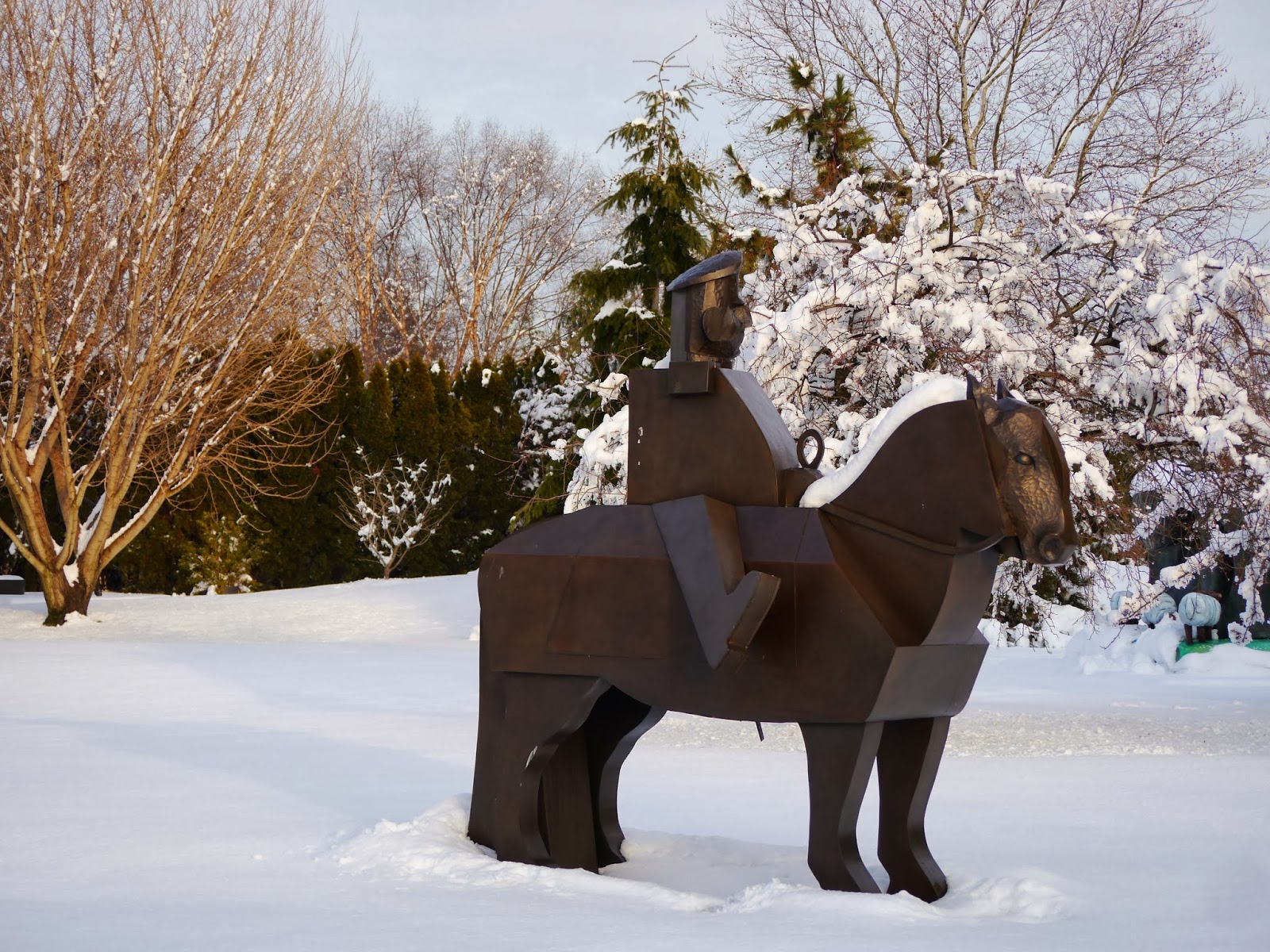 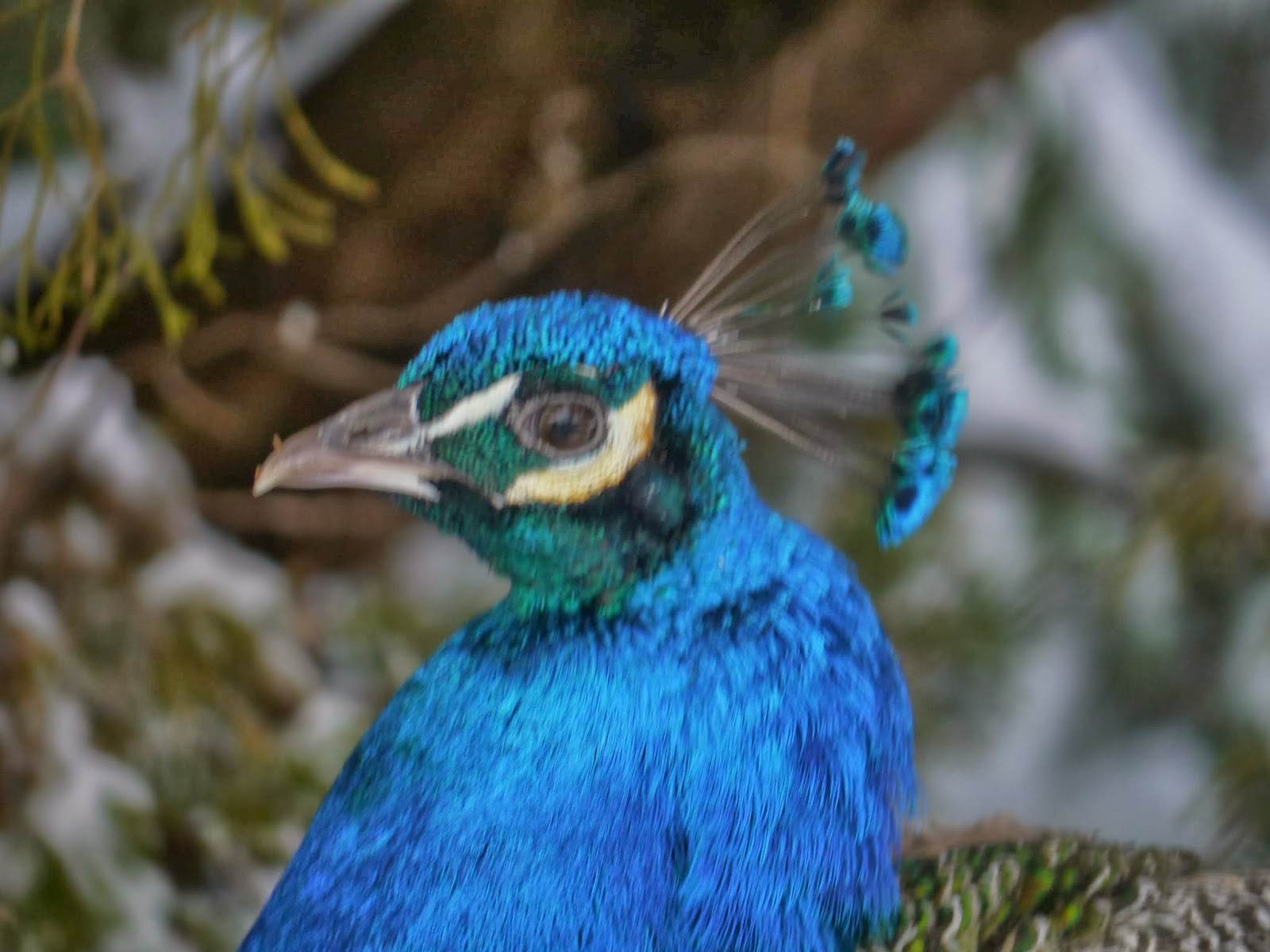 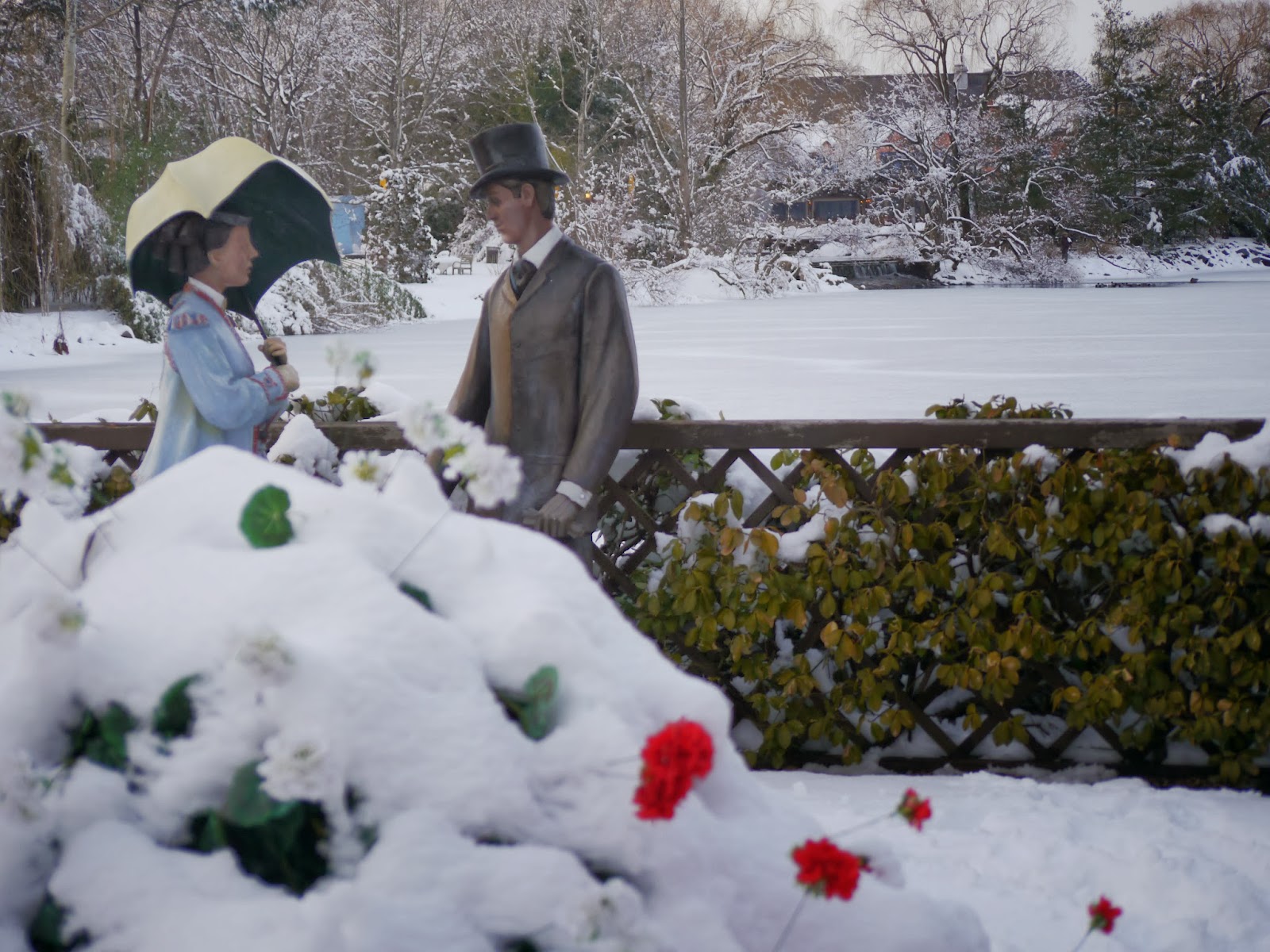 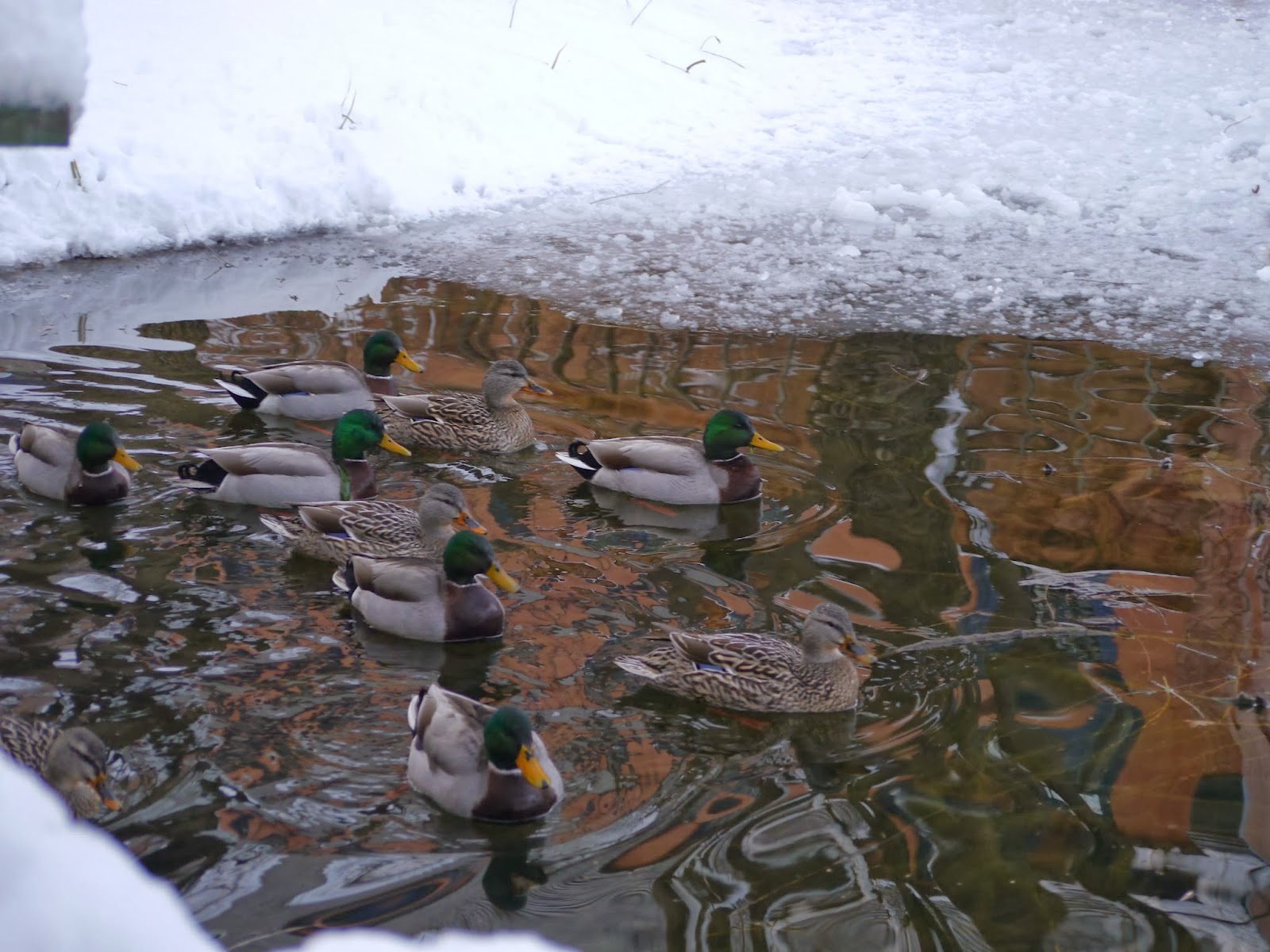 Posted by Jacquelyn at 4:40 PM No comments:

Life Lesson #2: What to do when it is not your turn

Last Halloween I was handed Life Lesson #1. With yesterday's ice storm I had a revelation that I decided to turn into this blog.

What to do when it is not your turn

We are taught to take turns early in life. When on the playground we have to let our friends go down the slide, too. Kids who don't learn how to take turns we quickly learn are no fun to play with, so we move onto playing with kids who do take turns.

In this case, though, I'm talking about those not-so-fun times in life. The times when you are the one who is facing something bad, be it a car accident, an illness, the death of someone close, or, in yesterday's case, storm damage.

Fortunately it is not always the same person's turn to suffer. Sometimes it might feel that way, but it is not. I promise you. When it is not your turn, you have a few options. You can sit back in your cozy warm house while others are without power, you can read a book and tune out the rest of the world, or you can help those whose turn it is. 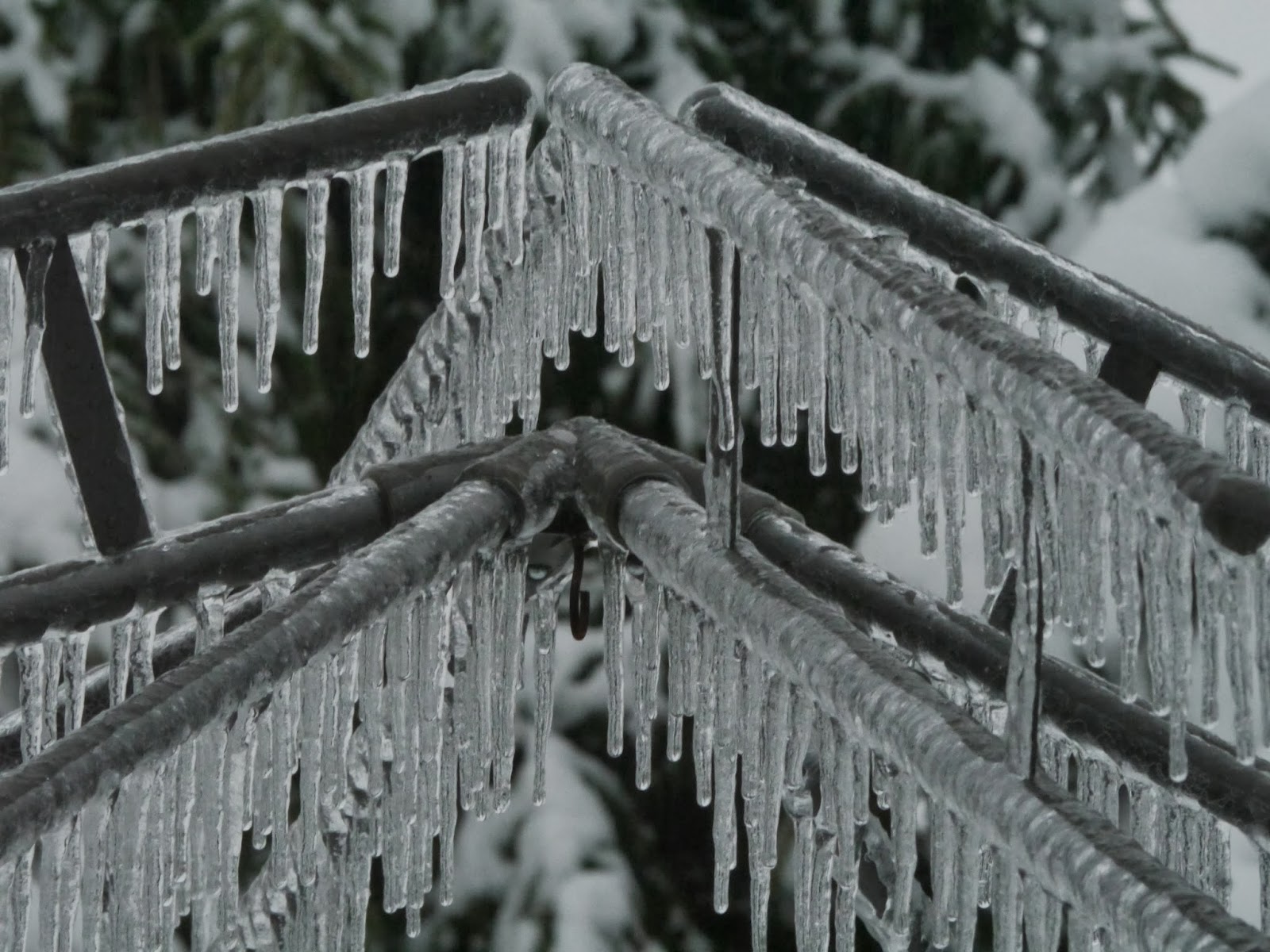 After spending a couple of hours snuggled under my blanket next to a roaring fire (so glad the gas fireplace worked when we lost power!) reading a fun book, I decided to toss on a sweatshirt and take a walk to survey the storm damage. (Amazing how my definition of sweatshirt weather has changed -- in this case it was above freezing and not windy.)

The people in the Woodlane section (homes build about 10 years before ours) got their power back at 10 AM. By 3 PM we were still without power and would be for the foreseeable future. On the other hand, they had a lot more storm damage than we did. I helped a woman take branches off of her sidewalk so people (like me!) could walk on it.

I kept on walking.

I popped on over to another section of the neighborhood. These homes were built 10 years after ours. They, too, had power (so not fair!). A husband and wife in their sixties were trying to yank a half of an elm tree off of a cedar tree they wanted to save. I could tell from a distance they were getting nowhere! I helped them tug and saw and within a few minutes the trees were once again apart. I accepted their offer of warm water to wash the dirt off of my hands.

I kept on walking.

Then I stumbled upon Tony and Carol, neighbors I have never before met trying to cut a tree so that it was no longer in the middle of the street. I went home. Grabbed my clippers and joined them. Together the three of us attacked that tree and a project Tony thought would take him years, took about an hour to get into shape. When Tony brought out a saw, I went across the street and trimmed the branches of another neighbor's tree so that they were no longer sticking in the middle of his driveway. They have been here less than 2 years and have already lost 2 1/3 trees.

While helping Tony and Carol we cheered when we saw the power return! It was about 5 PM and still light out. A part of me wanted to go home and check emails and Facebook, but I stayed until the branches were too big for me to cut with my pruner.

It felt good to help someone when it wasn't my turn to have storm damage. It was a lesson I learned after Superstorm Sandy when Jim (a neighbor I did not know before then) came over with his chainsaw and saved us from having to hire a tree company to take down our willow tree.

This winter we have had 9 storms, with a 10th in the forecast for the weekend. I've tried to clear the ramp and driveway for our next door neighbors, sometimes before I have finished our driveway.

You do what you can when it is not your turn. Even though my arms are sore, it still feels good. After living in the neighborhood for 14 years, I'm finally feeling like I'm getting to know my neighbors. Rather than focusing on what took me so long, I'm trying to focus on how else can I help my neighbors.
Posted by Jacquelyn at 8:37 AM No comments: