Time for Some Reflection

As I get ready to embark on a 5 week adventure in Israel (4 weeks on the Tell Keisan dig near Haifa and Akke, and a few days of sightseeing in Jerusalem and Tel Aviv) I can't help but be amazed at how I have changed since starting to work for The Bridge Academy.
Many of you followed my job hunting saga through Facebook and personal conversations. I left traditional work in 2002 when Ashley was born. Over the years I did some freelance writing for local papers, earned my MLIS degree from Rutgers, did some other freelance work, tried to start a business, and did some volunteering here and there. Nothing consistent or solid. A couple of years ago I wanted to return to steady income and applied to a bunch of jobs and had some really fun interviews, but alas no offers. I was fussy about what I wanted ... I wanted to work someplace where I believed in the organization, I wanted flexible hours (after years of freelance I knew regular hours would not work), I wanted to do a variety of tasks every day, I wanted to work with people I enjoyed being around, I only wanted to work part-time, and I wanted a short commute. In the end, the new position had to fit into my life, which is not always easy.
Backtrack to when Ashley was little and we were in MOPS (Mothers of Pre-Schoolers). A woman said she prayed about the type of man she wanted to marry--he had to love her children as much as she did, he had to be God-fearing, etc. A week later she met HIM at a wedding. Remembering this story, I told God what I wanted in a new job. He provided me with a job that is even better than I could have dreamed for myself.
I'm leaning on skills I developed as a freelancer (writing, taking pictures, reaching out to the press, keeping all the balls afloat) and learning new ones (I ran my first gala, I put together a newsletter after teaching myself Publisher). Six months later I am still amazed God sent this opportunity to me and that The Bridge Academy took a chance on me and my sketchy resume.
The Bridge Academy routinely take students who have been broken by their past educational experiences and fill them with love and confidence. They are doing the same for me.
In a couple of months I'll be having a milestone birthday and be setting up a Facebook Fundraiser. I recently learned 100% of the money my friends and family donate will go to The Bridge Academy. What better way for me to celebrate? Visit www.bridgeacademynj.org to learn more about the school and to make a donation.
The wine bottle was left on my desk one day last week. The art teacher transferred the Bridge logo (which is hard to see in this picture) on the bottle and left it, with some flowers in it, as a present for me. Who wouldn't love working someplace when you are routinely filled with so much love and thoughtfulness?
I'll be sharing my adventures through Pillspress.blogspot.com. Chances are initial posts will be rough sketches to be polished after I come home, so visit often if you want to read about life on an archaeological dig in the blazing heat. 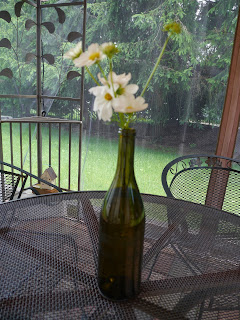 Posted by Jacquelyn at 9:41 AM