Dining with John and Abigail Adams

For the fourth year in a row, we had dinner with a colonist at the Cock and Bull Restaurant. Last year we dined with Betsy Ross and Oney Judge (Martha Washington's personal slave who escaped from Philadelphia to her freedom). This year we ate with John and Abigail Adams.

The evening was part of their Colonial Kitchen series, which has taken place winter Monday nights for over 25 years. The food is plentiful-- soup, salad, two entrees and dessert. The price has remained $21.95 for adults and $10.95 for children for as long as we can remember. 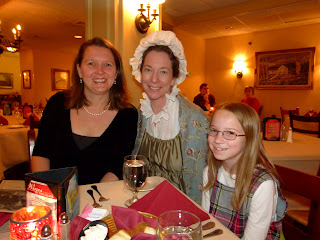 A side note: Ashley is wearing one of my dresses from when I was about her age. Even though I was taller than her at this age, hemlines were a lot shorter in the mid-1970s. 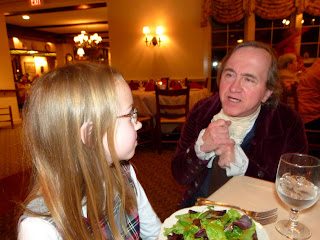 The best part of the event was watching John and Abigail make goo goo eyes at each other. More than 200 years later and they are still very much in love -- or so it seems.


As always, Marianne and Tom Tucker of Tucker's Tales provided the entertainment. They regaled us with their amazing collection of Colonial tunes. They are always happy to see us, either here or at one of their other events. They love history and they love performing together. 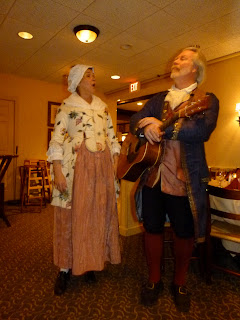 Looking at this year's list, there are still lots of great "people" to meet.
Posted by Jacquelyn at 5:16 PM No comments: 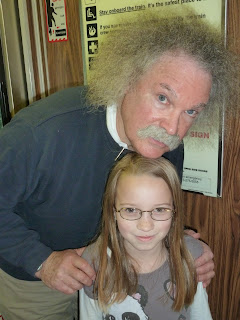 Two years ago, Princeton Tour Company decided to create an event called Pi Day in honor of Albert Einstein's birthday (March 14 -- get it 3.14). Einstein worked for the Institute for Advanced Study and lived at 112 Mercer Street in Princeton. Locally we was known for being kind to children, loving ice cream, and riding his bicycle. Last fall we met a man who, when he was a small child, remembers meeting Einstein. He confirmed he loved children.

We only attended one event, but it was a lot of fun! We rode the Dinky with Albert Einstein, his mother, his first girlfriend, his first wife, his secretary and other good friends. The "Dinky" is a two car train that shoots off of New Jersey's Northeast Corridor train route directly to Princeton University's campus. It is a 5-minute train ride to the Princeton Junction train station. It currently costs $2.75 each way. There are talks about relocating the Dinky, which will probably mean the end of this historic train. 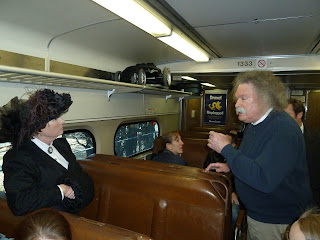 Sunday's train ride was historic for another reason. Albert Einstein was alive again and riding the train on his way to New York City. It was just like a character meal at Disney, or eating with a Colonist at the Cock and Bull Restaurant in Peddler's Village, PA. It was also a bit odd because the characters were never with each other in real life. His mother, his first girlfriend and his first wife never left Germany. His secretary and local friends never went to Germany. His mother berated her brilliant son as if he was the village idiot ("Albert do you remember where you are going?" "If you are good, we'll get ice cream afterwards."). For all we know, that is how she really treated her son. She told us his door at 112 Mercer Street was painted red so he could find it. It is now black.

You could tell the interpreters were having a fun time with the experience. They rode the train back and forth 3 times before heading into Princeton for more activities. I hope this is one event they can and do repeat next year.

To learn more about Einstein visit the world's only Einstein Museum at 102 Nassau Street in Princeton. It is located in the back of a store and is free or read these stories about Einstein's life in Princeton during the 1930's. The website includes gems of stories such as:

Einstein's first act in Princeton was to buy an ice-cream cone. He stopped at the Baltimore ice cream parlor on Nassau Street and ordered vanilla with chocolate sprinkles. An amazed divinity student, John Lampe, watched a transaction that stayed with him the  rest of his life. "The great man looked at the cone, smiled at me ... and pointed his thumb first at the cone and then at himself," Lampe later recalled.

When we rode the train with Einstein, he kept talking about getting a vanilla ice cream cone with chocolate "shprinkles." His love of ice cream was so famous that when the movie IQ was filmed in Princeton in 1994, Walter Matthau was photographed eating ice cream at Thomas Sweet while still in his Albert Einstein costume. It was a classic picture!

And so continues our tradition of spending time with people in history.
Posted by Jacquelyn at 4:33 PM No comments: