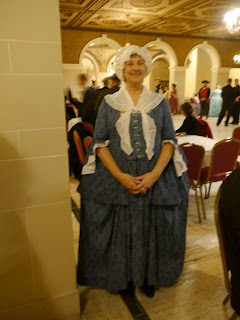 Last year I blogged a recap of the Colonial Balls we have attended during Patriot's Week over the past decade. This year's ball was very similar. Sue did the calling again. This year I heard her explain in Colonial times people would hire a male dance master to teach their children how to dance properly. At the end of his stay, someone would host a ball so they could use their new skills. She added her "husband died, so [she] took over for him." Sue's new gown arrived two days before the ball. Her new side hoops arrived the day before from France. 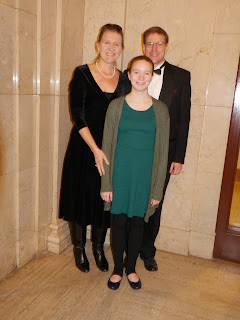 Ashley has long outgrown her Colonial dresses. Maia also does not have a Colonial gown. The girls rummaged through Ashley's closet and got dressed up, at least for 14-year-olds.

Don wore his trusty tux. I wore a dress I've worn before. It is long-ish and flowy which makes it fun for dancing. After seeing Patti and Neil dressed up, I wished I wore my Colonial gown. Hopefully I will feel so inspired next year. 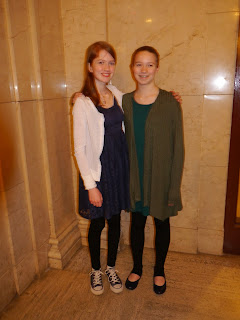 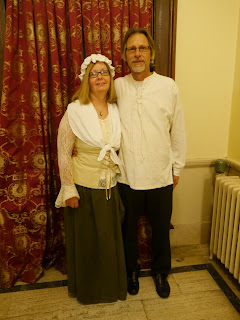 A change for this year was before everyone started dancing, a couple who knows how to dance the minuet showed off their skills. Then we started with a march (easy peasy) that ended with us being divided into four columns of pairs, perfectly lined up for the first dance. 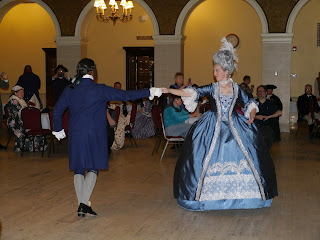 I found I laughed more during this ball than in the past. We are all becoming more comfortable with the steps, so I didn't have to concentrate as hard. Of course, whenever I thought "I've got this one!" I would turn in the wrong direction. Sue told us about a group that meets on the first Friday of each month in Newtown, PA that is very open to "beginners." I'd like to think by now we have at least graduated to the "intermediate" stage. I'll never have the grace of an advance person. 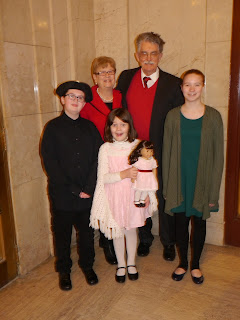 This year Chris joined us for the first time. Once Aimee hit her bedtime, he took her home early. 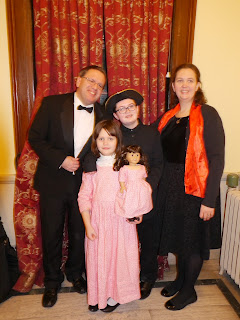 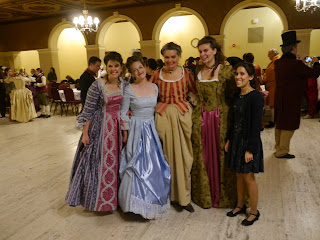 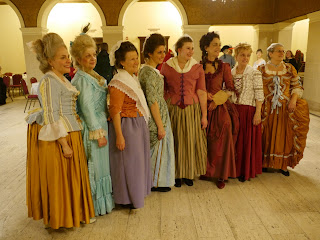 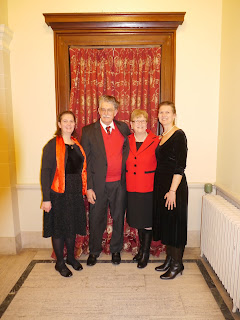 PS: The lighting at the Masonic Temple makes it challenging to take a good picture until the end of the night when they turn all the lights back on.

Posted by Jacquelyn at 10:01 AM No comments: 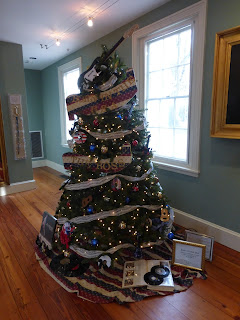 I feel like Don and I are on a Springsteen kick this year. First we saw him perform near the tail end of his River tour. Then we each read his autobiography. When we learned that Morven was having an exhibit of some photographs of him, we knew we wanted to go. We also knew Ashley had no interest in seeing it.

We tied our visit to when their annual Festival of Trees -- when local nurseries, the library, and local shops and non-profits decorate Morven for Christmas. The first tree we saw when we walked in was dedicated to Springsteen. I snapped a bunch of pictures on my phone and sent them to New Cousin Barbara (NCB).

Here are a few links to reviews of the exhibit. It started at the Grammy Museum of Woody Guthrie in Tulsa, OK, before traveling to Monmouth University near where Springsteen grew up down the Jersey Shore. I told NCB hopefully it will make its way closer to her in Massachusetts.

I enjoyed seeing the photographs of him. The collection included people who took the pictures that grace his album covers, and who also took candid photographs of him. I would have loved to have taken pictures of those, but that was forbidden. I liked one of him sitting next to a window at the oak table he wrote about in his book writing a song. On the far right of the picture is his reflection in the mirror. I was impressed the photographer (I think this one was his sister Pamela) did not appear in the picture, too. Don liked one of him playing piano. The collection made his autobiography come to life.

The exhibit was displayed upstairs. I overheard one of the docents saying when Morven was opened to the public they made the conscious decision to use it to host art exhibits rather than fill it with period furniture and turn it into a historic home.

I'm sure NCB would have drooled over the pictures for hours. For us, though, 45 minutes was plenty of time. I'm glad we went while it was decorated for Christmas as we really enjoyed studying the trees.

More images of trees and mantles: 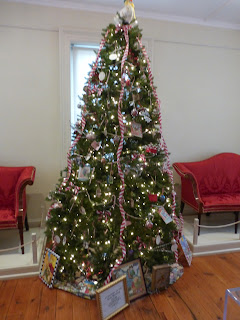 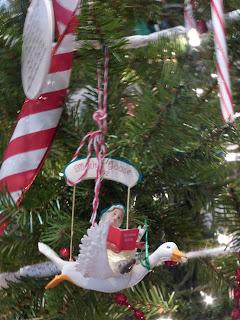 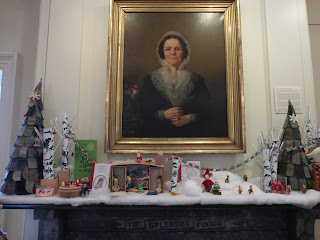 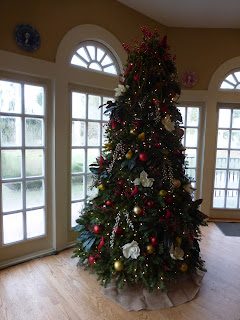 Posted by Jacquelyn at 9:05 PM No comments: 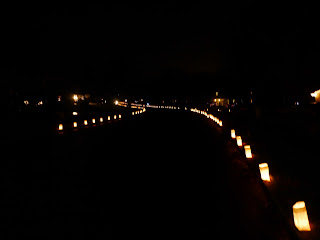 For the past 40 Christmas Eves, the Woodlane and Springwood neighborhood has lit up the area with luminaria so Santa Claus could find them. It has grown into such a tradition that only two out of the 68 homes did not participate this year (religious reasons cited, even though the first night of Hanukkah fell on Christmas Eve -- you know "the festival of LIGHTS.") For the past dozen years Kirk and Cathi have organized the distribution of the materials. For a nominal fee ($18 for 24 candles, bags, and sand) people can simply pick up the supplies from their garage. I should have taken a picture for how well organized that is. The candles were already subdivided into groups of 12 (good for a small house), groups of 18 (good for a medium length of yard), or gather two packets for a large corner lot (like ours).

This year Chris, a new neighbor on Abby, decided to plant the seed about doing 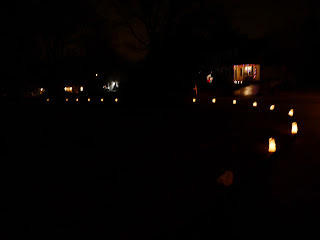 it in 2017. He distributed flyers on the 21st inviting people to check it out in the nearby neighborhood, or stop by his house since he was setting them up this year. We asked if we could, too, and he put us in touch with Kirk who said he had extra supplies.

We set up our bags, along with three other families in our neighborhood (including Chris). We were not next door to each other, but it still looked nice. One neighbor said she plans to do it next year.

Having done it this year, I appreciate the logistics involved. The bags should be lit around 5 PM in order to stay lit all night. We had dinner plans at 3:30 a half an hour away from home. Chris stepped in and lit our bags for us (we set them up around 1). Next year maybe we'll invite family over for Christmas Eve dinner -- something we used to do with the Pillsbury side before it became too complicated.

In the other neighborhood if someone is planning to be out of town, neighbors set up the bags for them. 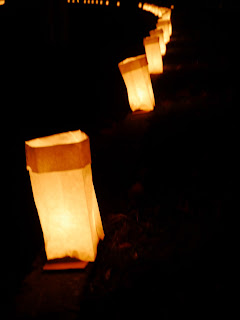 We studied how the "experts" did it. Some have a piece of cardboard or foil that goes under the bag -- as it rained earlier in the day, this was brilliant. I saw most people folded down the top of the bags, which gave it extra stability, making it easier to withstand the wind. Back home I went and folded the tops of the bags. Soon we'll be the experts and people will be visiting our neighborhood to see the marvelous display. Or not. There is at least one other neighborhood that has the same display. The more years it happens, the more houses that participate, and the more spectacular it all looks.

Merry Christmas. I hope Santa found your house even if you didn't have bags showing him the way. 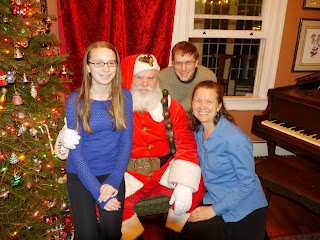 Posted by Jacquelyn at 10:18 AM No comments:

For Don's birthday this year I bought him a membership to the National Zoo. On the surface this seems like a silly gift since the zoo is free to visit, and we live 3 1/2 hours away, making visits planned rather than spontaneous. This makes our third trip to DC in 2016. The first was because FONZ (Friends of the National Zoo) members received an early peak at Bei Bei -- the newest panda. We went down to see Bao Bao on her opening display weekend and waited in line for two hours and still didn't see her. With membership, we did not have a line, but we still didn't see much.

We went back in May when Ashley had an odd day off. That time we slept over in Maryland and visited as the zoo was opening up for the day. That was fun! We saw Bei Bei spend most of his day hanging out in a tree about 10 feet away from his adoring public. 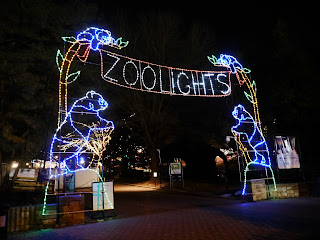 This trip was on Immaculate Conception, a day Catholic schools have off, but not public schools. Don continues to recover from open heart surgery and is job hunting. Ashley did not want to go, so she spent the day with my parents. Don and I had fun. The draw for going this time of year was ZooLights --something we saw being taken down in January.

Our timing was a bit off. We made it to the zoo at 3:45, not realizing the buildings close at 4pm in the winter. Fortunately due to ZooLights, some of the buildings remained open through the event, and some of the others stayed open until 4:45. We did see the panda bears (which we made our first stop). Papa panda Tian Tian was sleeping just out of view.

We also saw a zookeeper feed the red pandas. 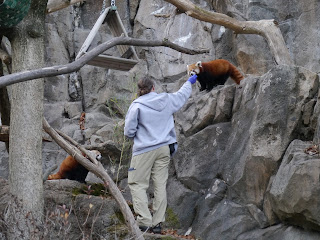 Perhaps the cutest sight of the day was seeing the mama and baby orangutan. The look of love in her eyes is universal. 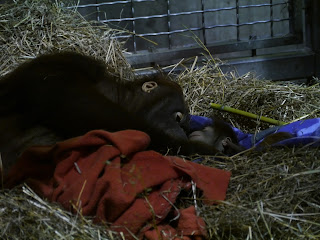 The reptile house, Think Tank, and small mammal houses stayed open throughout the event. Also happening that evening was Date Night. For $65 a couple ($50 for FONZ members) you got "free" hot toddy, champagne toast, sweet treat, and rides on the carousel, snowless snow tube, and train. Um... okay. As FONZ members we got 8 tickets total to the carousel, snow tub, and train. The tickets we didn't use we gave to a family with small children to enjoy. The person who bought her ticket through Groupon thought it was an awesome deal. 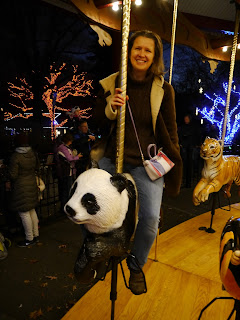 After being kicked out of the orangutan house (that baby was so cute) we rode the carousel and the train. By now it was getting dark enough to appreciate the lights. 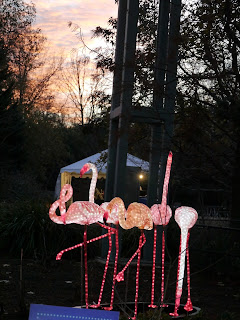 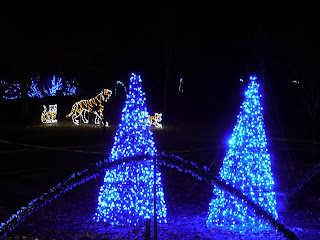 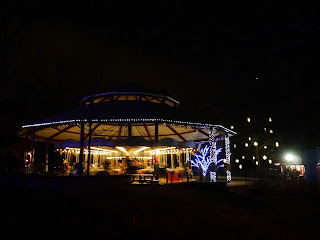 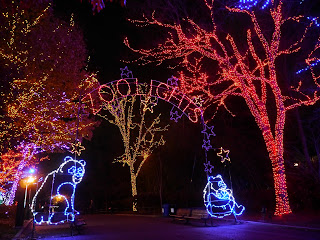 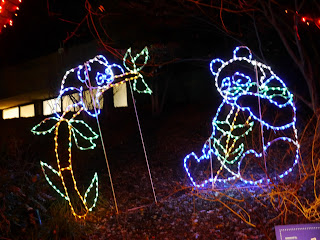 Due to some confusion, we met Panda Claws (I think his name is misspelled): 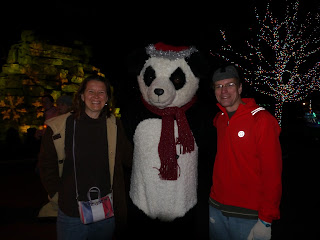 With the temperature at 48 degrees, it was not nearly as cold as we feared it might be. I was jealously watching the runners enjoy the nice night. Unfortunately it wasn't as nice in Lawrenceville as it was in DC.

Posted by Jacquelyn at 10:56 AM No comments: