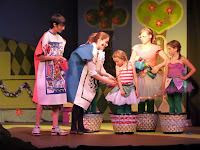 2010 found us spending more time in theaters as Ashley was in a few more plays. She really sparkles when she is on stage and with her fellow actors. In February she was a Villager in the play “The Grumpy Princess” with the Newtown Arts Council. July she returned to Somerset Valley Players as Rose (a white flower being painted red) in “’s Adventures in Wonderland.” Most recently she was Dinah in “Arrest these Merry Gentlemen” at ’s School. She is looking forward to being Orphan Kate in her school’s production of “Annie” in April.

In February I will be returning to the stage as Hester, a maid, in the Newtown Arts Council production of "George Washington Slept Here." The show is very, very funny. More will be posted as we get closer to opening night. www.georgewashingtonslepthere.webs.com

When not on the stage, we all enjoying seeing shows. Productions take on a new perspective when we know someone in them.
Posted by Jacquelyn at 11:00 AM No comments:

I took on a new challenge this year when I started training for a 5K run (3.1 miles). For 9 weeks I followed the Couch to 5K program. On Mothers’ Day I was able to run my first 5K at the with Jean Kutcher. We finished with an admirable 47:07 time, enough for Jean to place in her age group. Over the summer I lost momentum, and the desire to put in the miles. Once school started, I returned to training for another 5K, this time using a podcast of Christian music as a guide. Having music timed to the program made all the difference to me. On Halloween I ran my second 5K, this time finishing with a time of 37:55. Two weeks later I took 85 seconds off that time at the TACM run. I started training for a 10K (6.2 miles), with the ultimate goal of running the Disneyland Half-Marathon (13.1 miles) Labor Day weekend with Joanie Smith Morris. We are training at the same pace, but on opposite coasts.         Jacquie
Posted by Jacquelyn at 10:54 AM No comments:

This year my role as cyclist has transformed into activist. It all started innocently enough when I attended the NJ Bike Coalition annual summit in February. Since then I've gotten involved with the township’s bike/pedestrian task force, attended similar committee meetings in neighboring towns to both learn about their actions and to meet compatriots. I also participated in several "touring" rides to witness firsthand the progress being made. In NYC, I rode along the city’s circling and rode through the Big Apple’s streets on their spiffy new bike lanes. I participated in two different East Coast Greenway rides. The first showcasing the newly completed trail from Lawrence Twp to (a trail link I now regularly use for commuting home from the train station) and the second discussing the challenges and planned improvements for the route from to . In September, Kevin Gruenfeld and I participated in ’s Naked Bike Ride. In case you are curious, yes, I did wear my helmet. 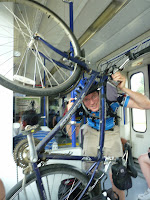 Amidst all this activism, the number of bike commutes has suffered this year. Late last year I set a personal goal of cycling more of the route and relying less on NJ Transit’s RiverLine rail service. Interestingly enough, between the longer distance and fewer trips, I ended up commuting the same number of miles. The past two years I commuted 3,000 miles with my bicycle. I need to figure out if my primary objective is to ride longer or drive less.
Posted by Jacquelyn at 10:52 AM No comments:

, . Visiting with friends on the West Coast is always the highlight of going to .

No trip to would be complete without catching up with Dave, Lisa and (13 months) Porcelli. It has been fun watching grow from an infant to taking her first steps. Ashley is very sweet with her. She introduced to the princesses and fairies. Perhaps on our next trip she will help her play musical chairs with Alice and the Mad Hatter.

This year we connected with the Smith family relatives. While not blood relatives, we really enjoyed getting to know Joanie Morris and her brother, and his son, Daniel (8) Smith. Joanie and gave us the insiders’ tour of and shared some ice cream with us at Mickey’s Soda Shop. 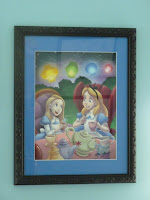 Over the trips we have gotten to know Brianna Garcia, a local artist. She drew an amazing picture of Ashley with in Wonderland. It hangs in Ashley’s room.

We tend to spend our evenings huddled around Ragtime Robert’s piano. His regulars have accepted us into his fan club. They even allow us a front row seat so we can watch his fingers as he plays. This past year he released two CDs. It is nice to now be able to listen to his magical touch between visits.

Kimberly Fero is another cast member we visit with after she is done with work. Kimberly has an autograph book of children dressed in costumes. She has them sign as their characters. Ashley has signed it as Tiger Lily, Jane Banks, Mary Poppins, Wendy Darling, and in Wonderland. Kimberly is the embodiment of Disney magic.

Over time we have gotten to know some of the guests and bump into them on our trips. We bumped into the Quibell family from , Masumi from , and others. It feels like home when we see so many familiar faces.
Posted by Jacquelyn at 10:48 AM No comments: 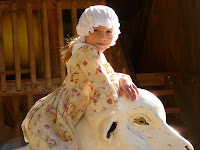 . Columbus Day Weekend we took a fall foliage trip to . It was my first trip to , a place Don visited many times in his youth. The Village is set in the 1830s, at the cusp of the Industrial Revolution when factories were becoming more popular than farms. Costumed interpreters guided us from our knowledge of the Colonial era to “their” time, 54 years later. Advances in technology made the printing press more efficient, and made fabric cheap and easy to purchase. It was a picturesque time of year to visit the Village.

For Ashley, the highlight seemed to be tossing acorns to the chipmunks (they are surprisingly cute in person) and making friends with a woolly bear caterpillar, whom she brought home with her.

While in the area, we spent a day in . In the afternoon we toured the Maporium, a 15 foot diameter glass globe. Standing in the center of the sphere you see the entire world as it was in 1935. It is worth the trip. While there we learned about Mary Baker Eddy, the founder of the Christian Science movement.

A trip to would not be complete without a visit with Don’s Aunt Elva Pillsbury. Aunt Elva is 94 years young, still lives on her own and is always on the go. By sheer coincidence, we were in Beantown when Don’s cousin, Paul Tomkavage, was celebrating his 60th birthday at his home with Cousin Helen Pillsbury, and their son Nick Tomkavage. This happy occasion brought Nancy and Rich Stromer, Don’s cousins from , to . Also fortuitous is that Nancy and Rich’s children, Sara Stromer and Joe Stromer live nearby and came for the celebration. Ashley and Sara bonded while making very silly faces and asking people extremely silly questions. Cousins Martin and Franca Pillsbury were also there for the fun.

The trip home included a detour through , to show Ashley the . Her eyes lit up as she joined the whimsical sculptures for some silly pictures. The ride home was long, but Ashley was kept entertained by the woolly bear caterpillar, which she has named Cindy Lu Lu (in honor of Dr. Seuss) and is now hibernating. If all goes well, she will turn into a silver moth next spring.
Posted by Jacquelyn at 4:00 PM No comments:

New On June 26, we welcomed Pat Smith into our family as he married my second cousin, Brittany Thomas. It was a beautiful ceremony held in Wallace Memorial Chapel at . Seven years earlier they met on the campus.

The wedding was a great excuse for a long weekend road trip. Our first stop was . Heidi Harendza was kind enough to let us stay with her and joined us in our day’s adventures, which included stops at the Eddie Bauer salvage store, Mimi’s Café, CommFest, and seeing an open air theater performance of “.” At CommFest we caught up with my cousin, Laura Fyfe Smith, and her friends Andrea Kopp and Megan “Mackey” McInturf. Ashley really enjoyed hanging out with the big kids while Heidi, Don and I soaked up the atmosphere of the arts and music festival. Unfortunately we missed seeing the rest of the Smith family this year. 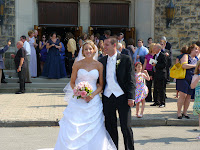 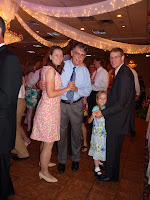 The next day we drove to New Wilmington, about an hour north of , for the wedding. is the daughter of my mother’s cousins Bruce and Debbie Thomas. Also representing the Thomas side of the family were my parents, John and Dawn Koetting. It was a real treat to dance with my dad while Ashley and Don danced during the Father/Daughter dance. The wedding was spectacular, and featured lots of attention to detail. For example, at the reception, each table number was a collage featuring pictures of the bride and groom at the age corresponding with that table number. For Ashley, the highlight was the photo booth. Everyone was encouraged to cram into it and take a set of four pictures. The booth printed duplicate strips – one for you to keep and the other for the bride and groom. Ashley went through repeatedly with the other little girls at the reception. We’re glad she made friends for the evening so Don and I could dance.

The highlight of our trip home was stopping to visit my cousins Scott and Karen Weber and their children in Indiana, PA. Growing up it was our tradition to see the Weber family on our trips from , to . It was nice to be able to continue this tradition and to allow the next generation to get to know each other. Although a few years older, Ashley had a lot of fun playing with her second cousins once removed. We enjoyed visiting with Scott and Karen. I wish we could all get together more often. Jacquie
Posted by Jacquelyn at 3:56 PM 1 comment:

I think the hardest part about creating a blog is trying to figure out where to start. I've been thinking about transforming The Pillsbury Press into a blog for at least a year now, but didn't know what should be our first post. I decided to take the 2010 edition of The Pillsbury Press and put it online. This way we can add news to it throughout the year.

This will not replace the annual newsletter as there are too many people close to us who are not online. Instead this will be a new way for us to keep in touch with all of you.
Posted by Jacquelyn at 3:43 PM 1 comment: