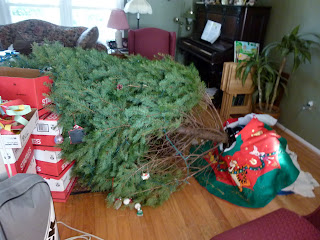 It seemed during the Christmas 2010 season our tree was on its side more than it was upright. It felt cursed.

This year we decided to take no chances. We bought a new tree stand. We went to a different place to buy our tree. I left it standing for a week before I put the lights on it. I left it alone a few more days before attempting to put ornaments on it. After placing a few dozen ornaments on the tree, when I wasn't even touching it, I noticed it falling away from me.

As Yogi Berra would say "it was deja vu all over again."

I snapped a picture and called Don.

Let's back track a bit.

For nearly 20 years we bought a tree from a local tree farm. Even after he stopped his tree farm business, he still sold to his regulars for a few more years. We never had any troubles with his trees. He laughed as Don carried one of his trees home on the back of his bike saying "now I've seen everything." 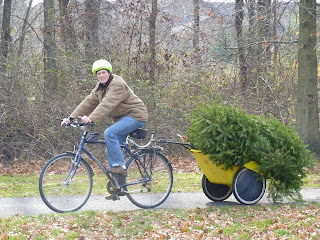 Last year he announced he was finished for good. We had to respect that. Still, though, we like the experience of cutting our own tree and Don likes hauling it home on the back of his bike.

We found a tree farm around the corner from our house on Keefe Road. Trouble was, they only sell trees a day or two a year -- about two weeks after we normally buy our tree. We waited, and purchased from them, happy to support a local business.

Don took the tree home on the back of his bike. Ashley and I walked home. Yes, it was that close.

Then the trouble started.


I decorated the tree as I've done for many years. As I finished, I went to move the tree. I should have moved it from the base, but I didn't.


I then heard CRACK. Tiiiimmmmbbbeeeerr.... down went the tree.

We propped it up. The stand was broken. It is the middle of December. We shoved scooped up the ornaments that had fallen. Don patched the ornaments together. He glued the stand together, too. 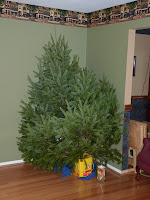 That only lasted about 5 minutes before Tiiimmmmbbbbeeeerrr!

Don found a stand at Wal-Mart, but it was the old-style stand where you have to adjust each of the sides and pray it stands up. It didn't.

We then shopped where most 21st century people shop at some time or other -- eBay.

As luck would have it, eBay had our model stand (the PivotPoint) available from a seller in Lawrenceville, NJ. What are the chances? There was already a bid on it, so we patiently waited and won the bid. The seller even delivered it to my door. The irony was he tried to sell it a week earlier for a Buy It Now price we would have gladly paid, but no one bid on it. That ended on a Saturday, and the tree stand broke for the first time on Sunday.

I think we finally had it upright,secure and decorated by December 20. I was never so happy to take a tree down as I was when we took that one down.

At least this time our troubles started in November. We still have a chance to buy a fake tree.

When someone asks why we don't have a "real" tree, I'll just point them to this article.

Merry Christmas! May your trees all be upright.
Posted by Jacquelyn at 10:38 AM No comments: 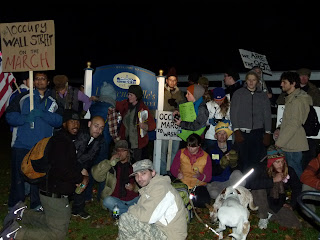 Through writing and photographing for the Lawrenceville Patch I have met a lot of new people and have had some different experiences. I've learned to say "YES!" when asked if I could cover a story and worry about the details later. So when my editor was on vacation and his supervisor asked me if I could take a couple of pictures of the Occupy Wall Street movement as they marched through Lawrenceville on their way to Washington, DC I jumped at the opportunity.


Rather than waiting for the group to find me in Lawrenceville, I asked Don to drop me off en route in Princeton. I walked with them for two and a half hours, covering a distance of about 10 miles. For the most part the group moved. I asked them to stop by the Welcome to Lawrenceville sign so I could get a good picture for the Lawrenceville Patch. They welcomed the stop.


It was at this point -- after walking on pitch black semi-highway with a tiny shoulder in Princeton -- that we gained a police escort. It was also at this point that the group decided to walk across the Route 206 to discuss whether or not to continue to Trenton. Someone shouts MIKE CHECK, everyone echoes MIKE CHECK. Then everything the speaker says is echoed. Yes, it is enough to give one a headache. As I see it:

PROS for going to Trenton:
CONS for going to Trenton:
Granted, the day's schedule called for a 29 mile march (or was it originally 23 and grew to 30?). Original plans (and those posted on their website) called for walking on Route 1. It was changed because someone told them it was illegal to walk on Route 1, or was it changed because Route 27 to Route 206 passed through Rutgers University, Princeton University and Rider University where they might gain some students to join the march. (Several Rutgers students walked for the day, or until their feet gave out. No one from Princeton joined. They didn't pass Rider until 10 or 10:30.)

The Google Docs directions calling for them to march down Route 1:
https://docs.google.com/viewer?a=v&pid=explorer&chrome=true&srcid=0B2T_A5nCMcMnZTQ2ZGNmYTMtYWFlNy00MDc2LTk5YzItYjY5YzgxMmYwMzc0&hl=en_US&pli=1

They decide to contiue to Trenton.

Each time they stop for a MIKE CHECK adds to the time it takes to finish that day's marching.

Along for the march is Liz Flock, a blogger with the Washington Post. I actually joined Twitter (JacPillsbury) so I could follow her journey. The next day she twittered that they group spent an hour discussing which route to take that day. They also debated whether or not the faster walkers could split off from the slower ones. Makes me wonder is their goal just to get to Washington, DC by November 23 (when a vote in Congress is set to take place) or is the goal to show a cohesive front. If they just want to get there -- take a bus or drive. If they want a cohesive group, then stick together.
I left them in Lawrenceville after taking a few more pictures of them on Main Street, just after they started arguing with Lawrenceville Prep students and "Occupied' a restaurant that was kind enough to allow the marchers to use their bathroom. Yes, indoor plumbing would slow me down from doing a 2 week march, as well as lack of other ammeneties.


There are 21 people committed to marching from NYC to DC. The group changes in size as people join the march for anywhere from a few blocks to a few days. Many of the people marching have jobs -- especially those marching for shorter distances. They are peaceful. I found them very welcoming.

I also found them tired. Picture how you feel after going non-stop for a few days -- no access to indoor plumbing, meals, or a comfortable spot to sleep. Of course they were cranky. Unfortunately this was only day 3 of a 14 day self-inflicted march.

I wish after 2 1/2 hours I could say I gained an appreciation, or even an understanding about their cause. They seem to be doing this because they can. No real thought or organization is in place. They do not seem appreciative of people helping them (if they did, why debate about continuing to Trenton where people are waiting for you). No one is in charge. I spoke with two different people about when to expect they would be in my area. Of course, I had two wildly different answers. I felt like asking: do you want press coverage or not? They are practicing "horizontal leadership," which takes a long time even with only 40 people in the group.

One person (according to Jason, they are not protestors) told me Occupy Wall Street sprang up as a result of seeing people in Egypt organize themselves for change, so people in NYC thought they could do the same. The big difference is the Egyptians had a goal (oust the president) and those in NYC want "change."

Yesterday my sister, Rebecca, wrote a blog about Occupy Wall Street:
http://ramblingrebka.blogspot.com/2011/11/can-ows-change-anything.html Sounds like they developed a mission statement yesterday. Unfortunately my eyes glazed over reading it.

Yes, change is needed. Yes, this group is making us talk about it. I just don't get it.
Posted by Jacquelyn at 5:29 PM No comments:

2011 has brought New Jersey some very strange weather. In a two week period we had the earthquake in August, followed by Hurricane Irene, Tropical Storm Lee, and a tornado watch. If a band of locusts had been seen in the area we would not have been shocked.

While my West Coast friends were complaining about cold rain, fall brought New Jersey beautiful California-like weather. It was easy to want to spend days outside enjoying the weather. It was also easy to forget that Halloween was sneaking up on us. 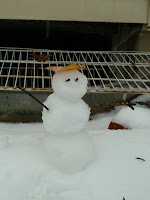 It rained, snowed and sleeted all day Saturday the 29th. We were very fortunate. In the end, there was about 3 inches of snow on the ground, no lost branches or trees, and only lost power for about 20 minutes. Nearly a week later some friends are still without power.

Fortunately the day before the snow I took Ashley to Little Acres for her annual Halloween picture: 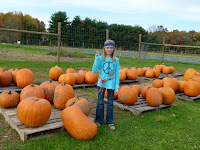 As she did last year, Ashley created her own costume. 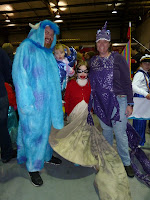 This year we did not do a family costume, though we popped into the firehouse and saw the Perry family. Jen made all four costumes from scratch. Amazing! 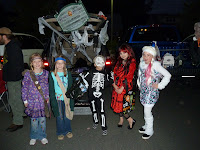 A week before Halloween, Ashley's school hosted "Trunk or Treat." It was a terrific night! After a few cold days, the weather was perfect for Trunk or Treat. As it should be for a 4th grader, Ashley barely said "bye" to us as she dashed off to hang out with her friends. At least she let me snap this picture. 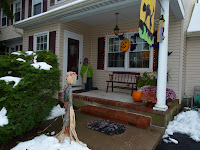 Onto the main event -- Trick or Treating! We were still in shock that it snowed before Halloween. The snow looked pretty, but it felt more like a scene out of "Nightmare Before Christmas" -- "when two holidays collied!" Fortunately it was a nice night on Halloween.

Before meeting up with Ashley's best friend, Emily, we visited a few neighbors. 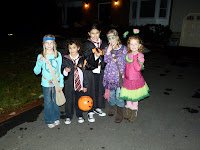 Ashley prefers trick or treating with friends. As has been our tradition the past 3 Halloweens, we met up with the Weingartner and Steege families to trick or treat on their side of the neighborhood. As the next day was All Saints Day, a day off in Catholic schools, Ashley, Emily and Kirsten had a chance to hang out for another hour before we headed home.

The piles of candy are overwhelming. Last year's pile lasted Ashley until this Halloween. This year, with Trunk or Treating, we seem to have enough to last us until Halloween 2013.

Happy Halloween! Hope yours was Spooktacular!
Posted by Jacquelyn at 10:23 AM No comments: