When we bought our home fourteen years ago, one of the big draws was having Village Park in our neighborhood. I had been rollerblading in that park for years. I loved it! Don said jokingly that we would never end up using the park once we moved to Lawrenceville. Happily he has been proven wrong.

The paths are paved and it truly wonderful for roller blading, walking, hanging on the playground, etc. What has made it even better is that it connects to the Pole Farm, a.k.a. Mercer County Northwest, a.k.a. Mercer Meadows. The name keeps changing, as does the park itself.

A friend forwarded me the following link from the 2011 presentation describing past, present and future plans for this location:
http://nj.gov/counties/mercer/commissions/pdfs/park_mmpresentation.pdf

An article about their plans appeared in 2013:
http://www.mercerspace.com/features/pole-farm-remembered-in-mercer-meadows-plans/

I visit this park fairly often. I do tend to stay away in January and February due to deer hunting. I tend to turn right at the tree line. Last week I turned left instead and saw: 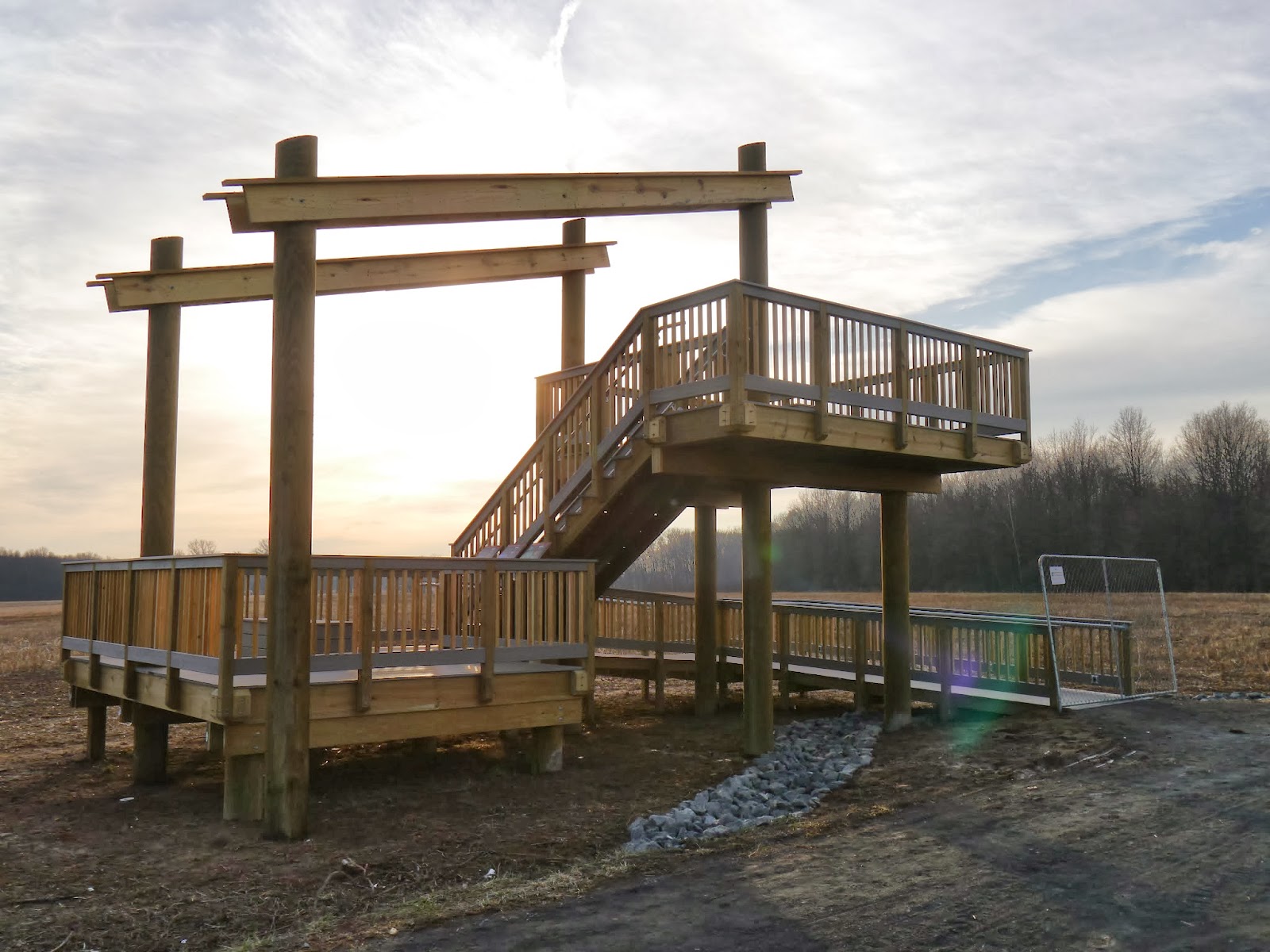 The last time I visited this side of the park I ended up going over a bunch of new bridges like this one, complete with new signs. 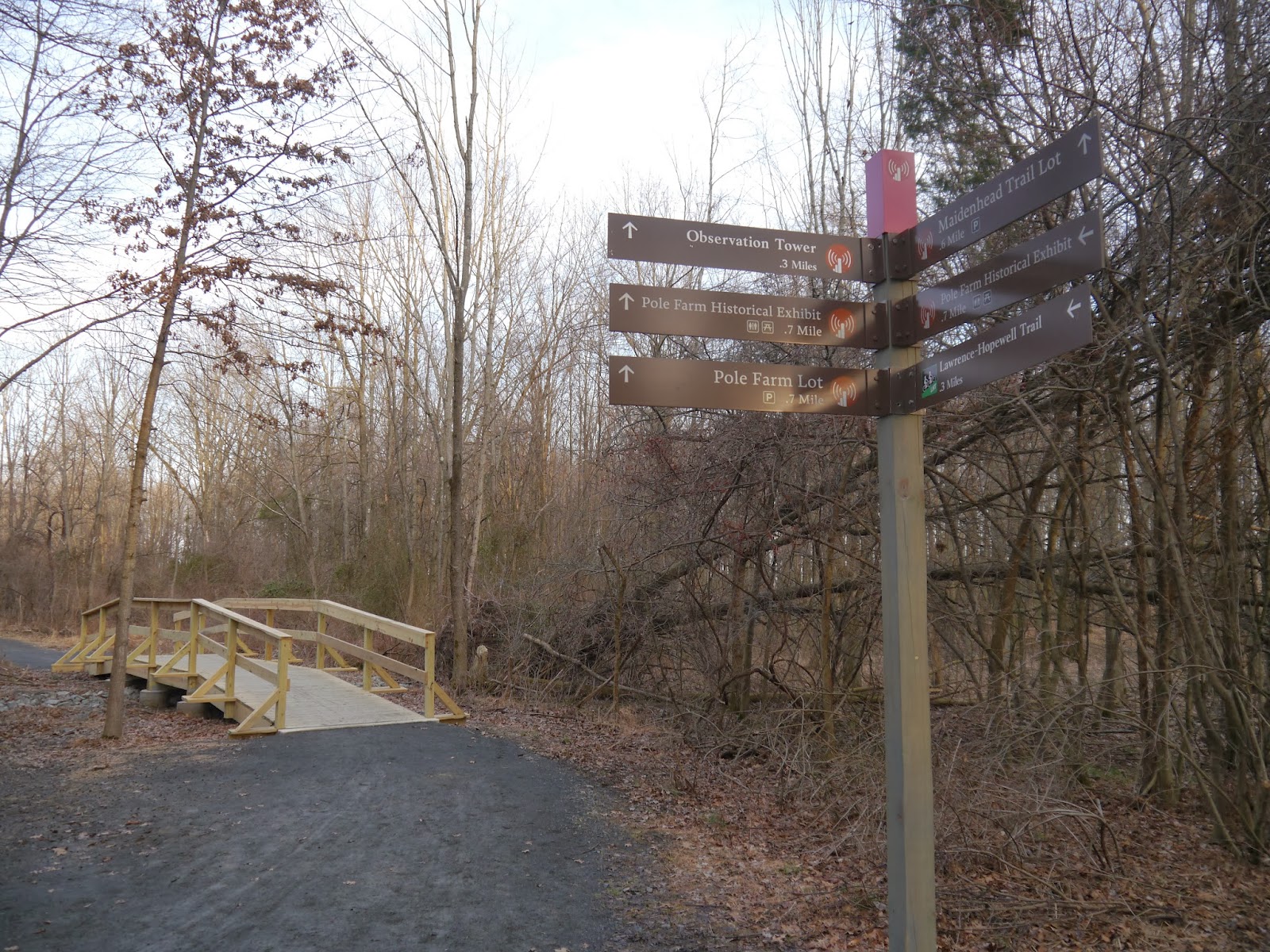 I see the new two story structure is an observation tower. Considering last year they removed many of the trees and brush, there is no reason to climb up to see anything. Hopefully new growth will be happening soon. The parl feels awfully bare these days, even when it is not winter. 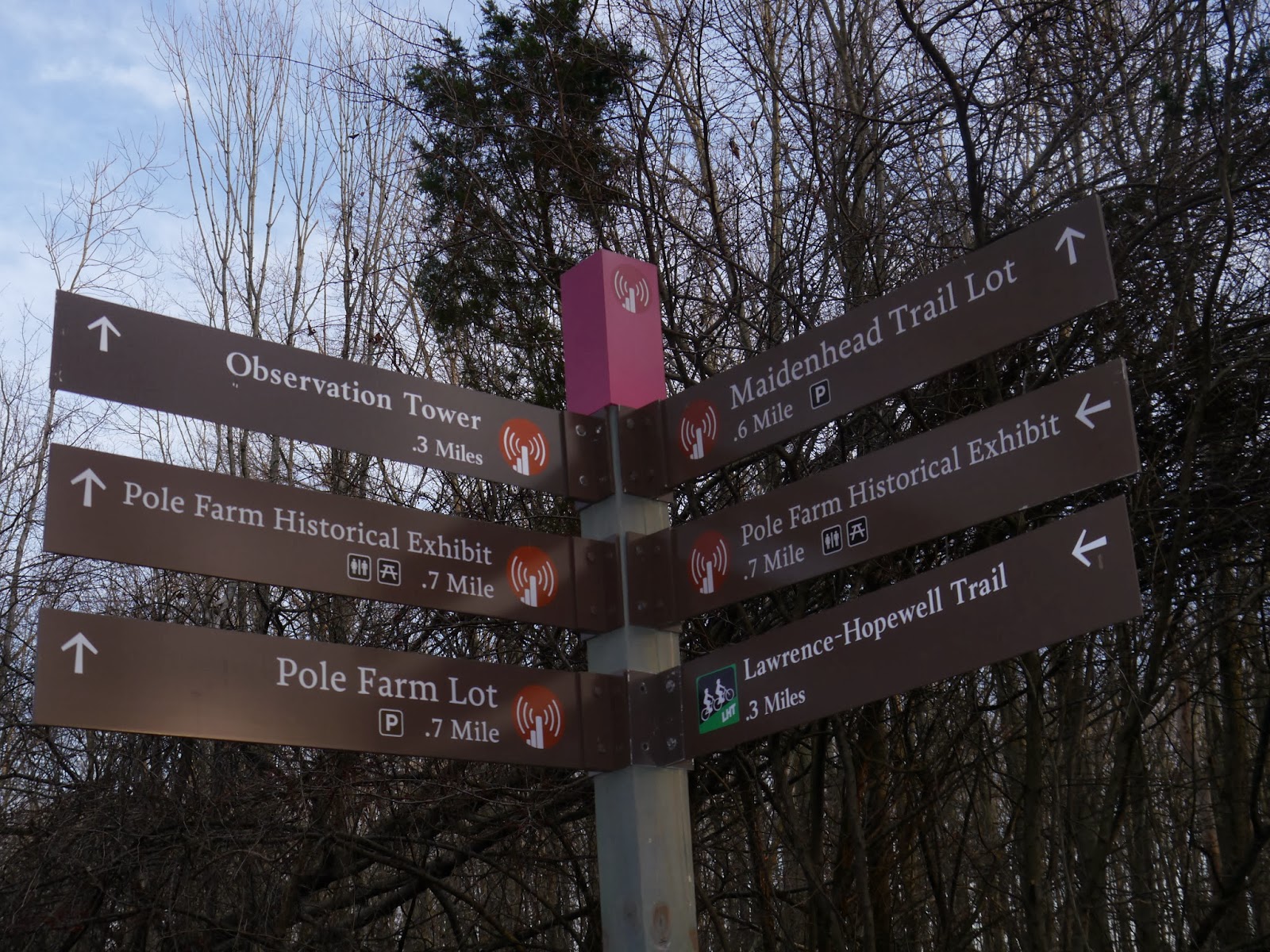 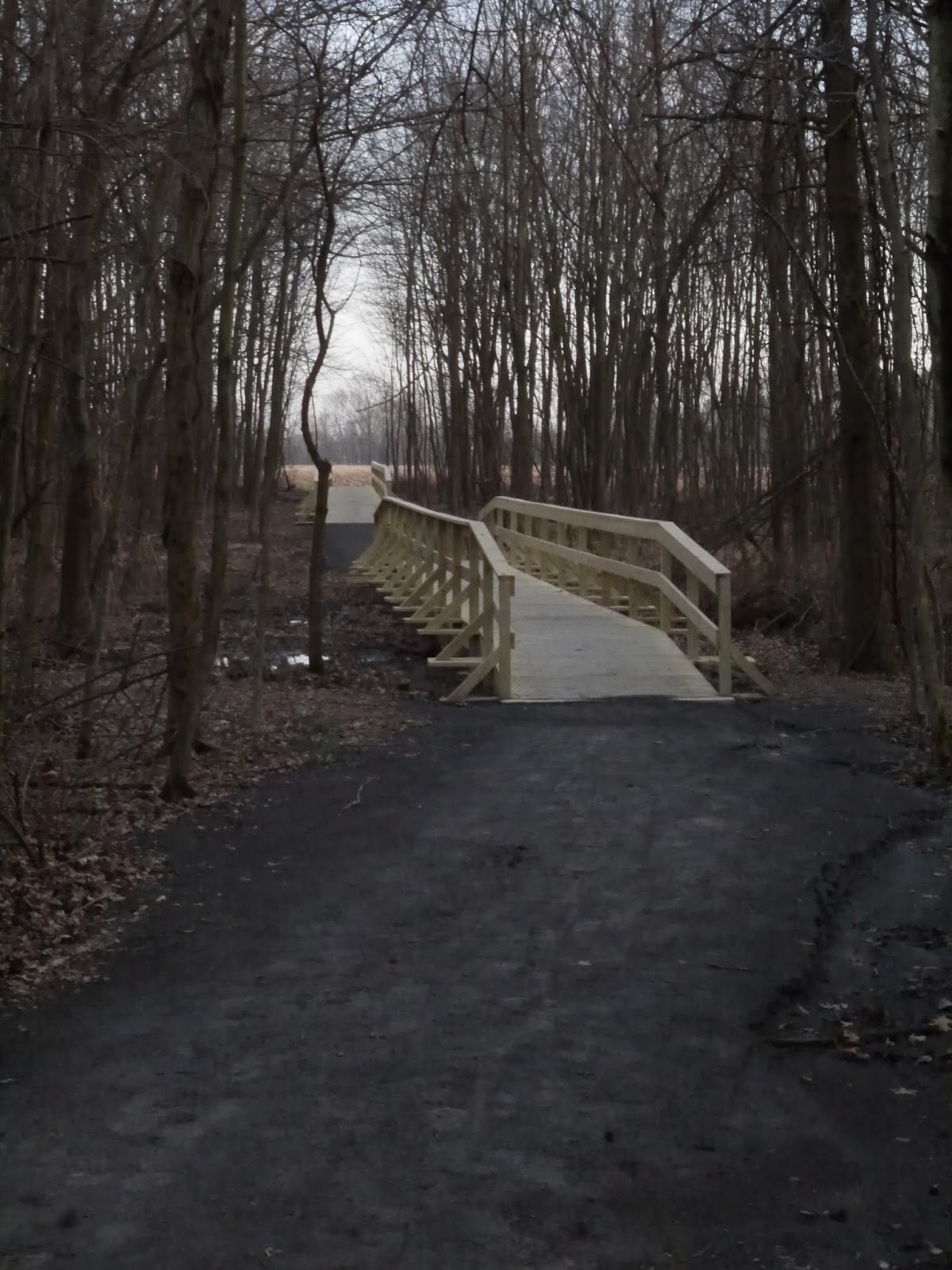 A little history about this location. For nearly 50 years, most international calls went through the "poles" of this AT&T transmission site. This was back in the early days of trans-Atlantic phone calls.

Also new to me on this photowalk was seeing a sign next to one of the abandoned poles. 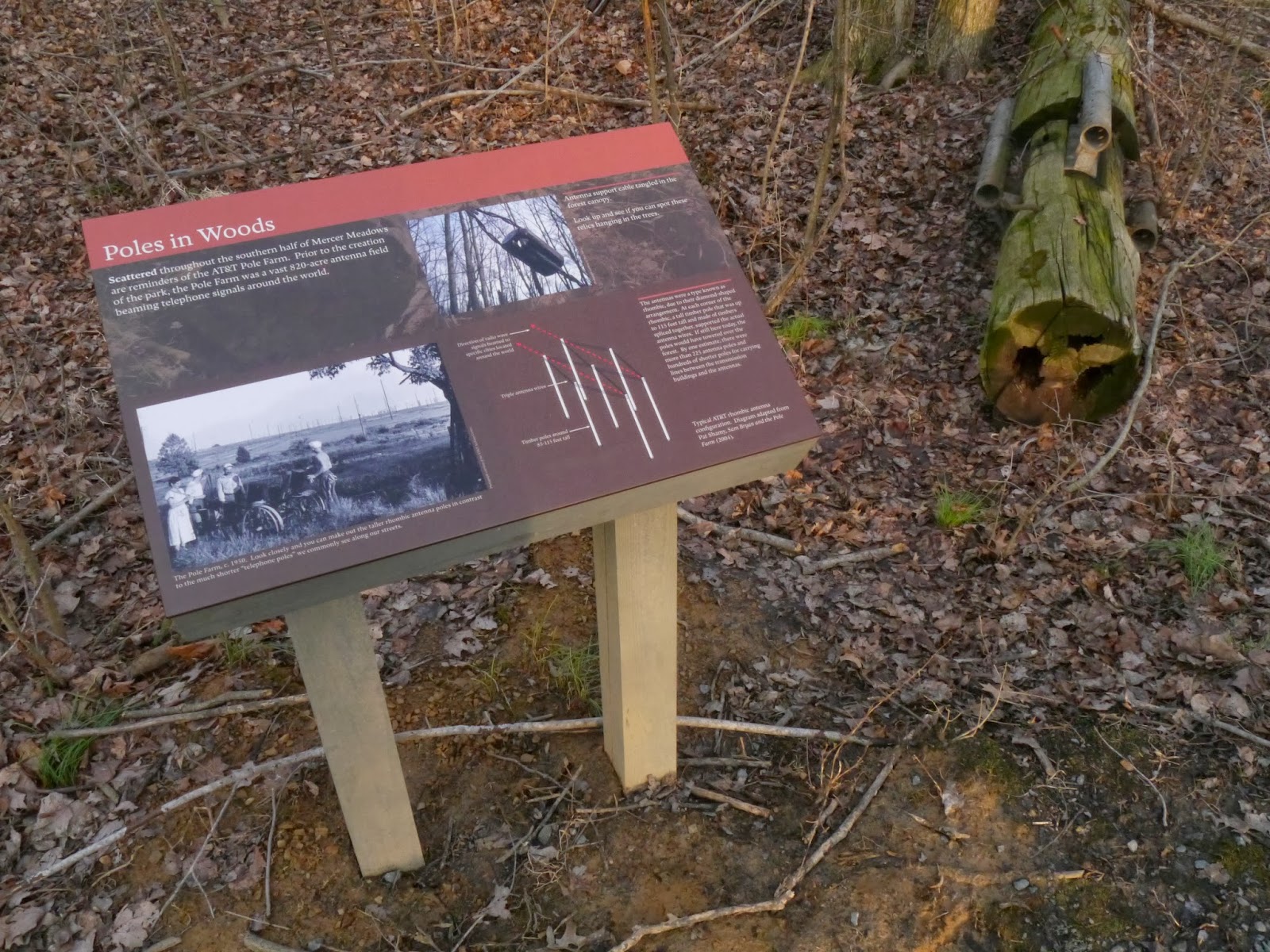 Back in 1975 when AT&T no longer had a need for a pole farm they tried to sell the land to an apartment developer. Then there was talk of building a golf course on this property. Thankfully people protested and plans changed. The county stepped in and purchased the property. Best as I can tell, it was opened to the public in 1998, about the time we bought our home. It was very rustic -- good for hiking and birding, but not running. It went through a series of "improvements," some of which washed away during a good rain storm. In 2013, the path seemed to change every time I went for a run on it. It was quite frustrating to have a path marked out, only to not be able to find it a later. The bridges have changed the paths, too.

A nice addition has been a latrine. I know it is too much to ask for a water fountain, but 3 miles from home is a water fountain in front of the Hunt House. There are also two water fountains in Village Park. Of course, I pack my own.

Today we get to enjoy this land. I'm liking the current round of improvements and look forward to mapping out new distance routes.
Posted by Jacquelyn at 2:15 PM