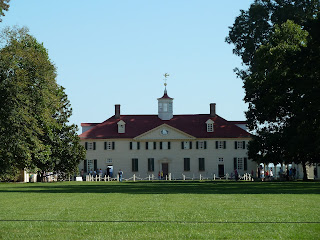 Ashley and I volunteer at Rockingham (where George Washington wrote his farewell to the troops after the Revolutionary War), so I thought it fitting for us to visit where George Washington called home.
We had every intention of starting our day here, then continuing 12 miles down the street to Gunston Hall (http://www.gunstonhall.org/). We had such a good time at Mount Vernon that we didn't allow enough time to go to there, too. Given that we spent the night before at home, it is amazing we had as much time as we did at Mount Vernon. 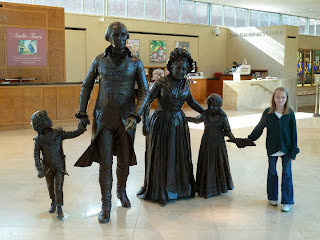 \
As with the rest of our weekend in Virginia, we really timed this just right. More than just beautiful weather, though, we arrived a year after Mount Vernon opened a new museum and visitor's center, and months after they restored the upper garden to how it would have looked in 1799.

I love that history is constantly evolving and changing as more research takes place. ﻿Rooms, such as the dining room, that in the 19th century were restored one way have been changed based on new research to indicate the other way was wrong. It is not as static as I was led to believe when I was in elementary school.

The day we toured the mansion, workers were busy making the "stone" front look fresh. Back in the 18th century a stone front would have been too cost prohibitive, so the Washingtons instead built a wood house (lots of trees on their plantation) and covered it with a fake finish made from sand and paint that gave it the illusion of being made out of stone. We even knocked on the front to make sure it was not real stone. 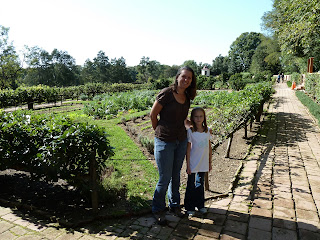 Since 1853 the Mount Vernon Ladies' Association has done a wonderful job taking care of Mount Vernon﻿ --  a time period that included the Civil War. The home and museum is open 365 days a year, yup even on Thanksgiving and Christmas. It is all done without taxpayer money.

One little neat tidbit we learned that day was that Thomas Edison was responsible for installing electricity in Mount Vernon in 1916, long after the Mount Vernon Ladies' Association began taking care of it.

http://www.mountvernon.org/
Posted by Jacquelyn at 3:41 PM